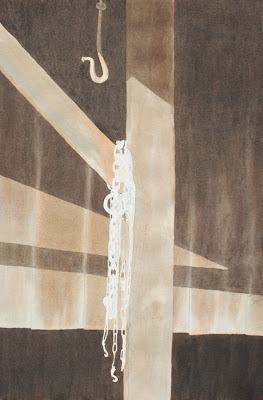 Earlier I mentioned some of the problems that I was having with the painting as I went along but after cooling down the background washes with some Windsor Blue, I felt a little happier and was ready to get to some of the more definitive washes. These would indicate the more abstract areas of the painting - mainly the strong shadow patterns that were cast against the background and the upper section of the post. The hanging hook was also partly in shadow too and all this was done with more Sepia slightly warmed with Burnt Umber. I started work on the hook itself being careful not to get too dark as I wanted this part of the painting to really show bright reflected light even though the surface patina of the metal was rather rough and slightly rusted. So far it was coming along mostly as I expected - little did I know how much trouble would come next!

Posted by Jeremy Pearse at 5:45 PM