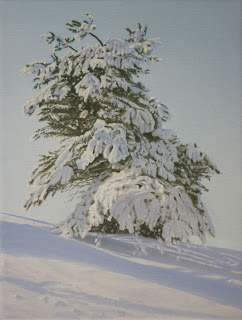 Finally here is the finished painting (at this point I'm now working back in the studio). The foreground went quickly and a number of subtle tones were added to the snow to keep it interesting. The shadows help give the painting a pull downslope and suggest motion while the tree is working the other way. Most important to the composition are these shadows, some are from other trees out of the picture and were a lovely bluish-purple. I added a few of the lowest snow covered branches last and they help give depth to the shadow under the tree. As a quick study, I'm happy with the results and the painting reminds me of a snow-covered Ent! Size, 12" X 9" in oil.

Posted by Jeremy Pearse at 2:30 PM No comments: 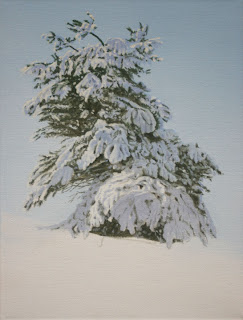 Not that much of a change from the last step, but now the tree has a solid base. Since I'm about finished with the upper part of the painting, I carefully go over it adjusting a few values here and there and adding some smaller details. At this stage, I stand back for a more critical look and as all seems fine, I'll work on the foreground next. 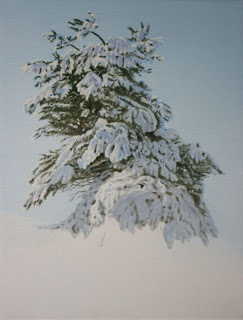 Here we are a step further along with most of the tree completed. I make the snow in shadow on the lower branches a little warmer by adding a touch more Windsor red to the mix then define some of the darker areas with raw umber. The highlights are almost pure titanium white and the snow shapes are defined with purple trying all the while to be subtle. I'm pleased that so far the painting is progressing as I had hoped. Next defining the lower branches and adding shadow.
Posted by Jeremy Pearse at 10:05 AM No comments: 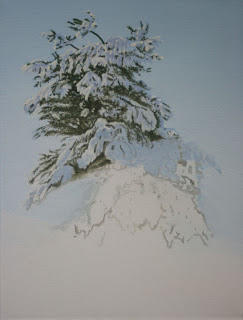 Here in the next step, I have defined the tree branches using a mix of permanent green and raw umber with a touch of yellow ochre. I have also added a slightly darker tone to the snow shadows higher up and brought some of that color down to the mid section of the tree. Using a warm white (mixed from titanium white and yellow ochre), I start to put in the highlights. So far I am satisfied that I have capturing the characteristics of this tree. I especially like the way that it leans uphill and it is obvious which direction the storm came from.

Posted by Jeremy Pearse at 8:36 AM No comments: 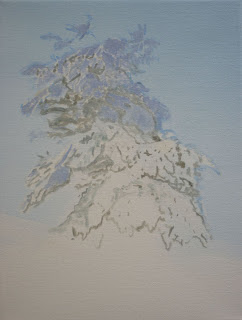 We didn't get a lot of snow this winter but the last storm left a thick layer of soft snow that was a delight. I started this painting in response to that storm and here we have just the beginning. I began by outlining the tree with a wash of thinned raw umber then painted a graduated sky with a mix of cobalt and cerulean blue. A warmer purple was laid in on the shadow side of the tree and a few darker areas indicated with more raw umber.
When working outside in the winter, one has to be well prepared. Sometimes I can find a spot where I can work from my car but more often I traipse all over the countryside looking for things to paint. Fortunately the day was warm and sunny so I could manage quite a bit before having to warm up. Next part two!
Posted by Jeremy Pearse at 8:22 AM No comments:

MORNING NEAR THE SALTON SEA 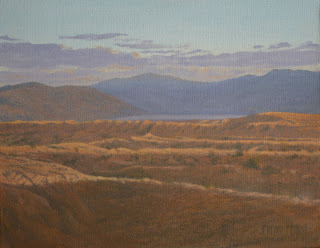 An earlier version of this small study was completed some time ago and eventually led to the Morning in the Desert series of paintings. The study was painted in response to the early morning sun raking across the land. Most of the landscape was in shadow so is a more even tone and distance is implied more with color than a lessening of value.
Coming across the painting in my studio recently, I decided to repaint parts of it as I wasn't especially happy with what I had done. Starting with the sky, I added more clouds then reworked the distant mountains slightly trying to create a deeper feeling of distance. The mid and foreground also got a good going over deepening the overall tonal value and adding slightly brighter highlights. The finished effect is okay but perhaps a little pastel-looking. Certainly, it is better then the original and some valuable lessons were learnt. The oil is 7" X 9". 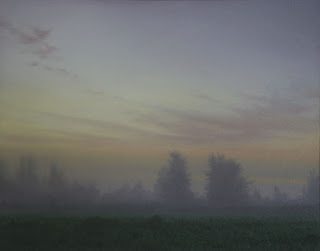 First I want to apologize for the lack of posts lately. I have been traveling quite a bit and also doing a lot of work on the house. Not real excuses perhaps but I hope to update more regularly from now on.
During one of my trips to Canada, I rose before dawn hoping to discover something new with the landscape near where I was staying. I certainly wasn't disappointed that morning as I was greeted with heavy mist when I stepped outside. Hiking near the river, shapes slowly formed into trees, bushes only to disappear within minutes as heavier mist rolled in again. It was a magical world unlike anything I had experienced before and as the light expanded slowly in the East, objects that were once shades of grey took on subtle form and color. And in the calm silence as I stood witness to the birth of another day, I was taken with a mood of peaceful unreality and delight. I seemed to be floating, part of an ethereal landscape with tendrils of mist slowly drifting past. Two crows flew silently overhead and distantly came the calls of geese far downriver. Moments like these are rare for me and have now led to a new series of paintings, the first of which is above. Morning Mist - November (oil on canvas) is an 8" X 10".
Posted by Jeremy Pearse at 9:35 AM 3 comments: