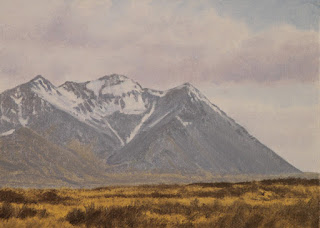 Travelling has gotten in the way of Blogging! Our latest trip to Iceland was, simply put, incredible! So many beautiful scenes, places and images - I collected so much that I have about a lifetime of reference to choose from. I worked mostly in my sketchbook during the day and continued painting each evening when we got back to the hotel. The above study was the first one I did when I returned home to the studio - it is a small painting (5" x 7") but I'm happy that I captured the distant mountains with the covering of snow just as I remembered them. 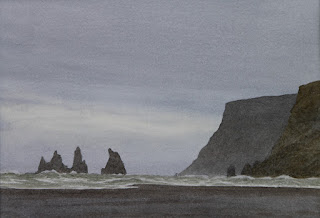 We basically did the circle tour around Iceland but the weather when we arrived was rainy, cool and overcast. The winds increased so much that some roads were closed and we had to sit out in the hotel one morning until they re-opened the road. The previous evening, we had walked down to the beach shown in the painting above and were nearly blown over by the force of the winds - I have never experienced such rough weather! Amazingly just offshore were large flocks of seabirds seemingly in their element and the wind didn't seem to bother them much at all.

Fortunately the weather improved over the next few days until we had wonderful sunshine near the end. Birdlife was impressive as we visited during the early migration period. I had a few birds on my list that I really wanted to see and was happy that I saw most of them - including 3 Gyrfalcons! Pity we missed the puffins as the weather was too bad to visit their nesting sites. Equally impressive was the landscape which changed quite a bit as we circled the island. Apart from livestock, the only other mammals we saw were reindeer. 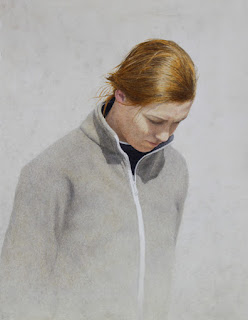 The Icelandic people were friendly and very helpful, our driver and guide exceptional. The girl in the watercolor above worked with horses and had a lovely voice. Other paintings of portraits and landscapes are to follow when I get the chance. I do plan to return to Iceland one of these days, probably in the summer this time to explore and further experience this wonderful place.
Posted by Jeremy Pearse at 10:05 AM 3 comments: