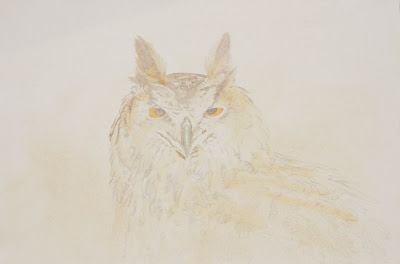 Here the painting has some simple washes added, mostly to the upper part of the head. At this time I'm trying to define the basic shapes and get a feel for how the painting is going to progress. For the darker areas, I used raw umber, for the lighter, raw sienna. A mix of Cadmium yellow and Cadmium red was laid in to the eyes but I realised that they would have to be a lot darker and also be slightly more of a reddish-orange. A few thin washes of Cerulean blue were used for the bill. I then went back into the darker areas with more raw umber but this time working on the edges of the feathers making sure they were done in a way to look light and soft. Although there is not much pigment on the paper at this point, I feel that I am off to a good start. I am especially careful in the beginning while working on watercolors as a mistake can be very costly later on so I tend to keep things light until I can see that the painting is starting to work.

Posted by Jeremy Pearse at 6:13 PM No comments: 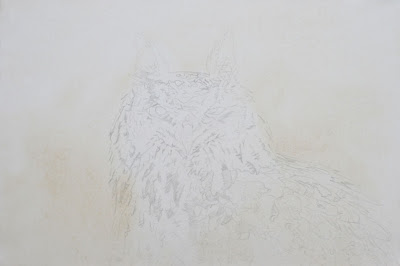 I'm now back in the US and hard at work in the studio after an interesting time in Hong Kong. I did find some time for pleasure over there including a birding trip with my good friend Richard. Being out and about again brought back many wonderful memories of days spent in Hong Kong watching birds and one specific time in particular - seeing an Eagle Owl in the wild for the first time! I have always had an affinity for owls so seeing such a large and rare owl was very special, so much so that I wanted to have another go at painting one. The image above shows the start in a series of images of a smaller head study, this time done on smooth (hot-pressed) Arches watercolor paper. After a careful drawing making sure I got all the proportions correct, I washed over the whole paper with raw sienna slightly greyed with raw umber and cobalt blue. The sheet was then stapled to a board so that it would dry nice and flat.

Posted by Jeremy Pearse at 5:58 PM No comments:

MORNING IN THE DESERT VI

Another painting completed some time ago, this time in oils. This scene was more of a reflection of something I saw early one morning in the Southern Californian desert. I was able to successfully add some of those stunted bushes which are characteristic of the area to the foreground and this helped bring that part of the painting into focus without distracting from the overall mood of the scene. It was very important to get the mountains in the background finished in a way that would reflect what I saw without becoming too bogged down in details. I like the sense of hazy distance in this one along with the effect of morning sun and a promise of a very hot day to come!

Posted by Jeremy Pearse at 4:23 AM No comments: 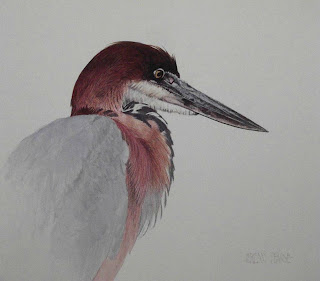 Due to an emergency trip overseas, I'm now in Hong Kong and will only be back in the studio later this month. I did however manage to find some time before I left to grab a few images of previous completed work and I wanted to share this small watercolor study done some time ago during an exhibition. The idea was to complete a painting during the evening as a demonstration of my technique, so I arrived with the underdrawing and background wash already complete. Basic washes were applied to form the shapes of the head and neck, and as these dried I added darker tones and finer detail to the beak and eye. For an on-the-spot demo, I think it turned out okay and will form the basis for a larger painting later on.

Posted by Jeremy Pearse at 5:07 AM No comments: