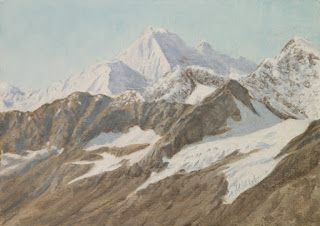 This small study was one of the few oils I did from the trip but is a good start for some larger paintings. It was done on a gessoed board that I prepared myself. I find these are easiest to travel with being thin and easy to pack. Usually the thin paint dries quite quickly (at least in time before any flights I may have to take) and I can stack quite a few of them safely together for my homeward trip. Watercolors and drawings usually form the bulk of my work on these adventures though. 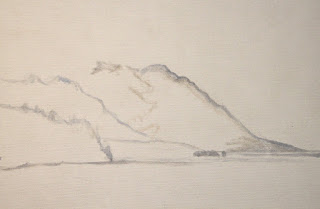 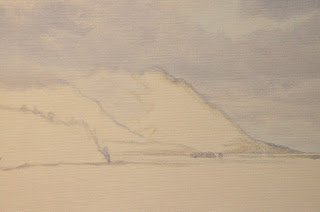 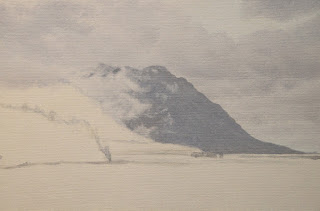 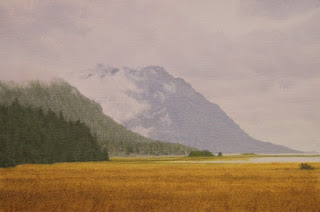 The oil shown here with progression from a quick sketch on canvas through to the finished painting is my usual method for smaller works such as this. The scene is of the flats just outside Juneau. We saw this layered landscape with drifting cloud soon after visiting the Mendenhall Glacier. Back in Juneau, we took the cable car up the mountainside for an aerial view. The weather was cloudy with periods of rain but we took a hike further up the mountainside looking for birds and other views of the amazing landscape that surrounded us. 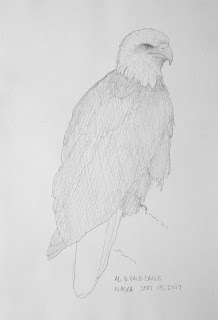 There were plenty of Bald Eagles around and I managed this quick drawing in my sketchbook. Watching them in flight around the mist and light rain was incredibly moving, I'm sure I'll start work on some eagle paintings soon. Next on to Ketchikan and Skagway
Posted by Jeremy Pearse at 6:29 PM 1 comment:

We had planned a trip to Alaska for some time and were really looking forward to taking a cruise. We landed in Seattle where we had a few days enjoying the city before heading out to the ship. The boarding was completed by early evening and we left Seattle under light rain which eventually taped off and led to a wonderful sunset over the sea - an auspicious first day. The next day saw us under somewhat rough seas that had a lot of passengers heading to their cabins to lie down! Taking a slightly different route than usual, the captain headed to the Inside Passage earlier than expected where the waters were a little calmer - much better for everyone! 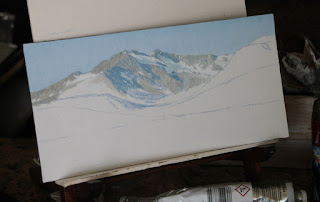 I spent most of the time on different decks taking photos but also did quite a bit of painting. Here you can see my travelling set up when using oils. Some time ago, I made a small lightweight foldable easel that I can use on any flat surface and just prop up the canvas panel as I work on it. I also brought along a sketchbook and watercolors for quicker studies. Along the way, we visited Juneau, Ketchikan, Skagway and Glacier Bay National Park as well a slowing from time to time to see other sites of interest. I was able to paint onboard at times with the landscape in front of me and also worked on paintings later on in the evenings. 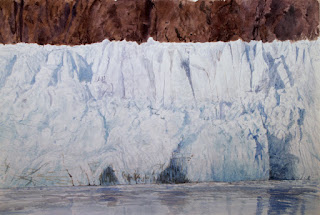 In Glacier Bay, we were greeted by the wonderful sight of the Margerie Glacier. I did two studies of this glacier and enjoyed the spectacle of milling birds against the ice and deep blue water, the brisk invigorating air and occasionally sights and sounds of the glacier calving. I was constantly awed by the vastness of the landscape and it was really difficult to put any kind of scale to what we were seeing. I found it useful to find trees within the landscape and use that as a kind of measuring stick. Truly incredible! 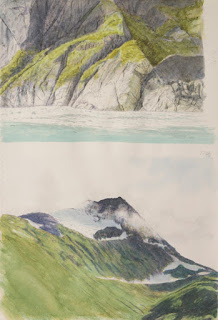 Most of these sketchbook studies are intended for larger paintings, some of which I have completed thus far. It was heartening to still see plenty of snow on the mountains just as I had hoped. Paintings of this kind have been a wish of mine for years now and finally I was getting a chance to do some!
And if what we were seeing from the ship wasn't enough, we then took daily excursions to other areas when docked at the various ports along the way. This further enriched our visual experiences but more on those trips in the next post.
Posted by Jeremy Pearse at 2:49 PM 1 comment: