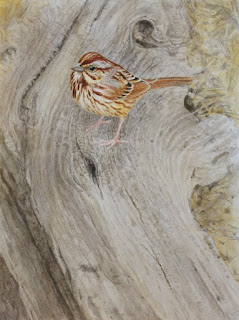 Although I started this painting earlier in the year, I have only just got around to finishing it. As with most of my paintings, I'll set it aside for a few weeks and see if anything needs to be done to it later on. Getting reference for this painting was somewhat problematic as although these bird were often seen right next to where we were staying, they were cautious and often hid in the dense bushes nearby. I tried luring them out with crumbs but mostly attracted House Sparrows and Starlings instead!

Posted by Jeremy Pearse at 1:42 PM No comments: 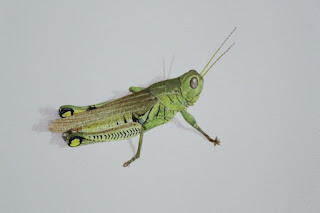 These paintings are part of a long-term project that sadly, I haven't had much time to work on lately as been working on other things. I think this is a Spur-throated Grasshopper (Melanoplus ponderosus) which are quite common on the areas around the Eastern Shore. They come in a green form (shown here - which I like the most) and also brown and grey/red forms. Apparently they are responsible for quite a lot of crop damage in the US. I was attracted to it by the interesting and somewhat striking pattern of green, yellow and black. Since it was a bright but cold day when I came across this individual, it sat quietly on my hand while I drew it in my sketch book - the cold made it slow and lethargic. I added the colors and finer details later when I got home. 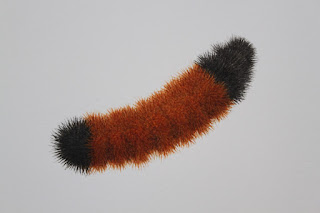 Wooly caterpillars are often seen in late summer through the autumn and occasionally during spring when they come out after over-wintering. They turn into a somewhat drab Isabella Tiger Moth and although I can't remember seeing the adults that often, the caterpillars were sometimes seen everywhere. They were in our garden too feeding on the Clematis but they also feed on other plants including clover where we would find most of them on our walks around the reserve (being careful not to tread on them). The coloring and the amount of black/brown on these caterpillars (which varies) is supposed to be a portent as to the severity of the coming winter. 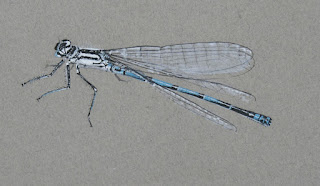 I'm not sure of the species of this damselfly but I loved the blue and black markings and the zebra-striping on the thorax! This one was done in gouache on tinted paper. The others done in watercolor, all are around 5 x 8 inches.

Posted by Jeremy Pearse at 9:54 AM No comments: 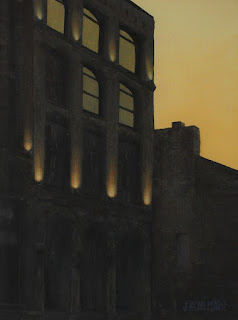 When I saw this building with its arches, lights and dark windows against the evening sky, I immediately thought of dragons. I'm not quite sure why but the place exuded a certain atmosphere that I haven't felt anywhere else. During the painting, I needed quite a few applications of paint until I got the tone and texture that I wanted as most of the painting is quite dark. Size is 12 x 9 inches, oil on canvas.
Posted by Jeremy Pearse at 10:18 AM No comments: 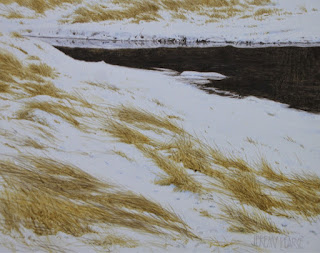 We didn't get a lot of snow last winter but still, there was enough for me to get out and find some interesting scenes that I wanted to paint. Mostly, this painting related to studies done in my sketchbook and as there wasn't that much subject matter to consider with this one, I started working directly on a smaller canvas panel. I laid in the dark strip of water first building up a few layers of paint then started adding the grasses trying to keep a flowing motion running throughout the painting. I needed quite a few goes before I was happy with how the grasses looked, then the smaller details were added. I'll probably do a larger version when I'm back in my proper studio and have more space in which to work. Size of this one is 8 x 10 inches, acrylic on canvas.

Posted by Jeremy Pearse at 6:53 AM No comments: