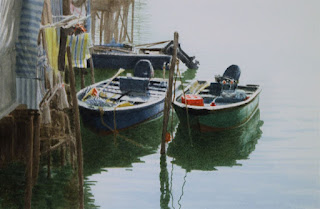 A recently completed commission of some boats I saw on Lantau Island, Hong Kong. I liked the way these back-lit boats created abstract shapes against the lighter water. The reflections and ripples gave the scene some sense of movement - I dotted a few different colors around the painting hoping to add interest without overdoing it. Size is 7.5 x 11 inches, watercolor on Arches paper.
Posted by Jeremy Pearse at 2:28 PM No comments: 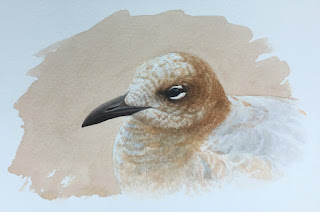 Laughing Gulls were almost always seen along the shore and also in the harbor where I could usually find about 30 or 40 individuals. The younger birds would congregate along or near the edges of the water where people would often feed them with pigeons and sparrows joining in. This was a great opportunity for me to get references and do plenty of sketches. This study of a young bird moulting into its first winter plumage piqued my interest as most of the brown juvenile plumage on this one was slowly giving way as new white and grey feathers came in. Size is 6 x 9 inches, watercolor on Grumbacher paper. 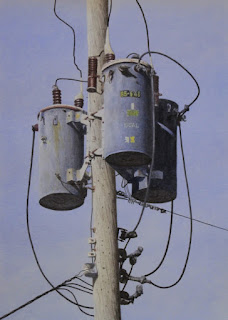 I first thought of transformers as a subject for a painting while I was travelling in Japan. Most cities and towns had them in various forms so when returning from our travels, I fully intended on exploring what I had seen of them and doing a painting or two. Well, like so many of my ideas, that didn't happen - instead much later, I focused on these three transformers I found near where we were staying last year. I really liked the way the morning sun created shapes and shadows along with all the wires going in different directions. It certainly was a challenging subject and for some reason, I couldn't seem to stop working on it! Every day I would find something else that I wanted to do until finally I decided to hide it away under a pile of sketchbooks! I think that when I pull it out again, I'll still find one or two areas that I want to work on. Now that the painting is (mostly) finished, I'm not precisely sure what I think of it. Perhaps I could have done a different background or something as this hasn't quite lived up to the initial idea I had in my mind. Well, so often is the case. Size is 15 x 11 inches, acrylic on Strathmore paper.

Posted by Jeremy Pearse at 7:42 AM No comments: 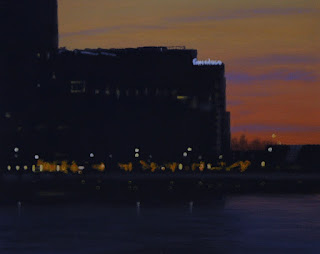 I saw this scene in early Jan 2022 when the Christmas decorations were still up. Getting up before dawn had been my habit for some time and when I walked down to the boat dock and looked across the water on a cold and still day, this composition presented itself to me. My small study was done directly in a sketchbook trying to get down as much information as I could before the light changed too dramatically. I used acrylic so that I could more easily overpaint the darks once the base color was dry. For the larger version, I switched to oils and once I had most of the shapes in place, I let the paint dry overnight. It was then a case of subtly adjusting some of the tones then adding the various lights and subtle reflections. I think I'm getting closer to what I want to say with these nocturnes but actually each painting requires a lot of planning and thinking through. This oil is 8 x 10 inches.

Posted by Jeremy Pearse at 7:46 AM No comments: 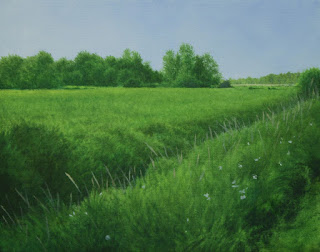 Walking back from a day exploring, I came across this view across the meadows. I liked the way the roadside ditch drew your eye into the scene, and on to the thin yellow strip of brighter grasses against the distant treeline. I kept the sky simple in this one so as not to detract from the landscape. Foxtail grasses and wildflowers added interest to the near bank. Oil on canvas, 8 x 10 inches.

Posted by Jeremy Pearse at 6:17 PM No comments: