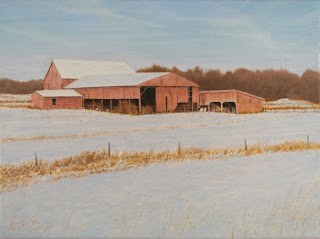 This painting was another in the studio waiting for a re-work. I started on the sky deepening it somewhat and  then adding a few high thin clouds. The wood-line behind the barns was deepened slightly and extended in height to slightly above the forward-facing building - this helped the anchor the buildings within the scene somewhat. I also re-painted the snow adding a slightly warmer underpainting to the mid-ground then getting cooler towards the foreground. The barn buildings were slightly deepened in tone and then a few details picked out in places finishing off with a little work to the grasses. In the frame it looks fine but I'll give it a week or so - who knows, by then I may find something else to do to it! Size is 9" X 12" - oil on canvas.
Posted by Jeremy Pearse at 10:38 AM 2 comments: 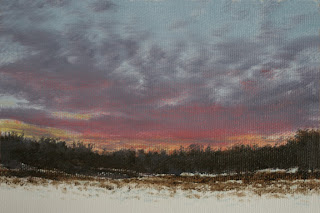 I did this study awhile ago and developed the lower foreground slightly later on when back in the studio. As is usual with these smaller studies, the idea is to try and capture an idea or mood then translate this into a larger painting. I have actually started the larger work but am struggling with it a little so have set it aside for now while working on other paintings. As mentioned in an earlier post, I'm trying to work through the unfinished painting I have here in the studio before starting some new ones. While that is the general idea, in reality I am often swayed by a new and exciting idea or thought. I am trying to keep any new paintings small at the moment so as the give the larger ones more of a chance of being completed.
Winter Sky study is an oil on canvas - size 4" X 6".
Posted by Jeremy Pearse at 6:50 AM No comments: 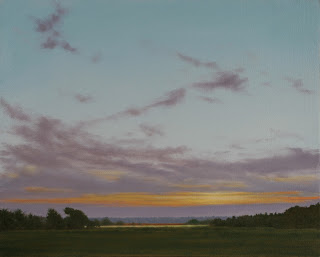 Sorry for the long delay between posts - here is something to tide you over. Yet another small study of the evening sky. I have been working on a quite a few different things but have yet to finish anything other than this study - lots of unfinished paintings lying around the studio : (
Perhaps it's an unsettled feeling of the in-between seasons that is throwing me off - still cold and wet here and looking as if spring will never arrive! I hope to have more to show you soon. Summer Fields is an oil on canvas, 8" X 10".
Posted by Jeremy Pearse at 6:45 AM 4 comments: