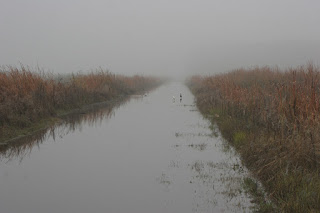 Not far from Johannesburg is a nature reserve called Marievale. We visited one overcast and misty morning. The heavy rains of a few days previous had flooded most of the roads in the reserve, fortunately Steve's 4WD managed the water with ease. The pic above shows what awaited us upon our arrival - low clouds and plenty of standing water! Still, there were birds about including Little Egret, Black Heron, Squacco Heron and Hottentot Teal (all in the above pic - in the distance, a small party of Yellow-billed Duck). 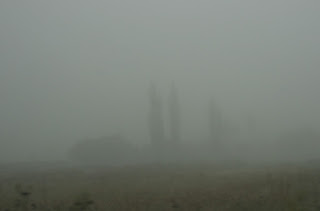 Our drive to the reserve was a bit slow through all the mist but made for some very interesting and atmospheric images. The occasional figure appearing along the roadside was visually exciting as they seemed to just appear out of the mist. Birds were scarce but a Glossy Ibis flyover was a bonus. 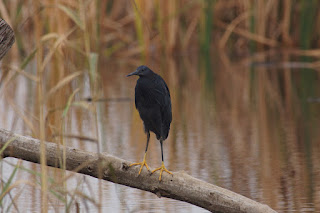 Later (once we had found a hide that wasn't flooded), we settled down to see what was about. A Black Heron (above) didn't take long to arrive, along with a very exciting African Rail. Earlier we had seen a Black Heron fishing and characteristically shading the water with its wings - my first views of this behavior! There were quite a few common species about but not many waders - probably due to the deep water. 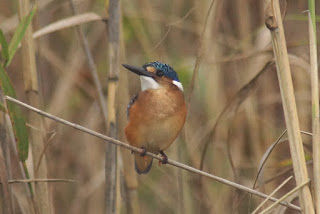 A Malachite Kingfisher came and stayed for awhile (earlier we had seen a Half-collared Kingfisher) and our arrival had frightened off a Giant Kingfisher that was perched on the roof of the hide. Finally a Pied Kingfisher over the water brought our tally to 4 (later 5 for the day as we also saw 2 Woodland Kingfishers near Steve's farm North of Pretoria). I managed a few drawings of Blacksmith Lapwings in my sketchbook. 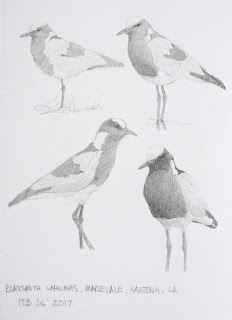 On our way out, we had much better views of a Squacco Heron plus plenty of other waterbirds, also displaying Red-bishop Birds and various whydah and widow birds. All in all, a great visit! 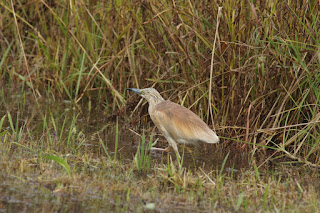 Photos above by Steve Pearse and myself. 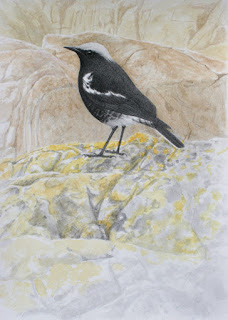 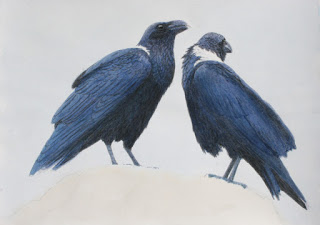 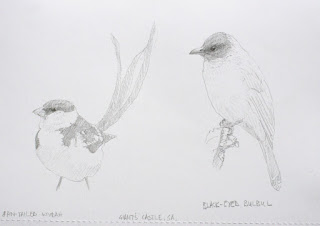 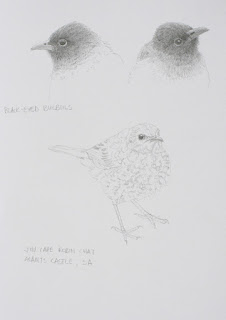 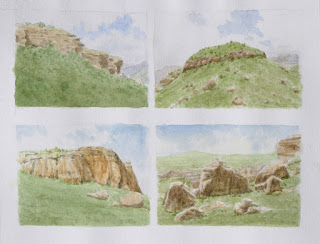 I also did studies of the landscape. The ones shown above (also in my sketchbook) are just ideas and some may be the basis for larger oils later on. I think I gathered enough reference on this trip for a few years worth of work! I'm not sure when I'll be able to get to some of these SA studies though as I have a watercolor exhibition coming up soon so will be finishing work for that plus other stuff I'm working on at the moment - busy days!
Posted by Jeremy Pearse at 7:06 AM 3 comments: 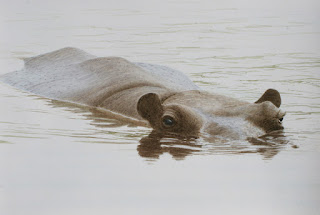 In Kruger Park, this hippo was hanging around the shallows while we sat in the hide nearby. At times it moved from a resting place half-submerged under an overhanging tree to deeper water further down the channel. One time it surfaced just in front of the hide pushing up and aside waterlilies, scattering the ever present Jacanas and flicking its ears to clear water from them. Astounding - and all just a few meters away! 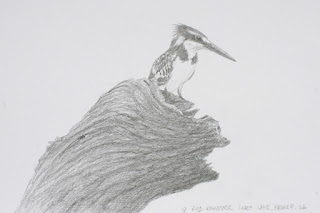 Pied Kingfishers were also present, at times resting on nearby branches, occasionally fishing. They were great subjects while they sat nearby affording wonderful views for sketching and photographing. When I have time I'll get to some larger watercolor paintings of them. 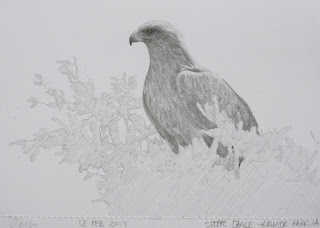 It was extremely hot in the park, 40 degrees Celsius! We drove around with the windows down allowing a slight breeze that made it bearable. Bird life was great with many species seen and photographed. The Steppe Eagle drawn above was resting in the top of a small tree. It drew a crowd as did a recent lion kill. Due to all the rains though, the bush was quite thick so most animals were difficult to see. Still we had great views of a small herd of elephants that crossed the road just in front of us - we missed leopard and rhino though. Still there is always next year!
Posted by Jeremy Pearse at 8:18 AM 2 comments: