Here are the final paintings done from the Iceland trip. Some are unfinished unfortunately but I didn't get the time to work on these as I had wished. I'm sure that they will be worked up eventually and I'm also sure that I'll be doing more paintings from the trip later on.
There was still a lot of snow on the higher elevations as shown in this series of paintings and I have to say that I was quite captivated by the distant mountains swathed in snow and the lower regions more open showing how the moss had covered most of the lava. Next would come smaller bushes then dwarf trees etc slowly covering the landscape as we saw in other areas of Iceland. 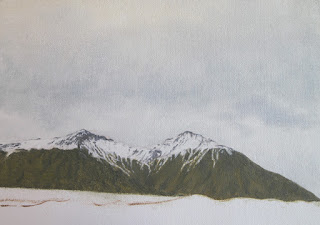 I remember how some of the peaks would drift in and out of focus as clouds drifted across them and it is this effect that I would like to put into a large painting. This will take some thinking about first though and certainly more than a few pre-studies. Actually I consider many of the paintings shown here as pre-studies as I am better able to work out what it is I want to say in this smaller scale. 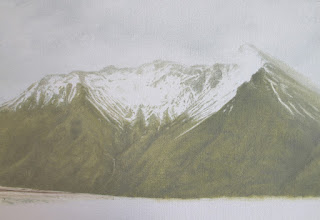 This work was completed after a portion of our trip was delayed due to bad weather and we arrived at a visitors center with only about half an hour to spend as we saw fit. I immediately headed outside and began jogging towards the glacier at the foot of the mountain shown above (although we were told not to go there as there wasn't enough time - still I thought I could make it). Well after about 30 seconds, the wind came up in such a way blowing directly at me that I was forced to a walking pace - and a slow one at that! Realizing that the Gods had spoken, I gave up my attempt to reach the glacier and continued at a slower pace looking around me at the various rocks and plants eventually making it back just in time to catch the coach onto our next stop. 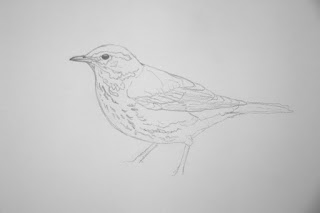 While looking at and photographing the plants mentioned above, a Redwing slowly approached calling all the while. I kept still and was afforded amazing views as it passed just a few feet from where I sat. I did a few quick sketches and took more photos as I followed it about for awhile. The bird seemingly not at all worried by my presence.

So then, from incredible and towering mountains to black-sand beaches that spread as far as the eye could see, from grass sod houses to picture-perfect blue fjords, from desolate rocky coastline to foggy moors, from massive waterfalls to serene slow-moving streams, Iceland had all this and much more. Birding was incredible (although due to the weather we didn't see any Puffins) and there were many species either resident or on migration during the time we were there so I consider myself lucky to have visited at that time to see it all. I'm quite sure that there is still plenty left to see so I will go back some day, probably during the summer months next time.
Posted by Jeremy Pearse at 8:20 AM No comments: