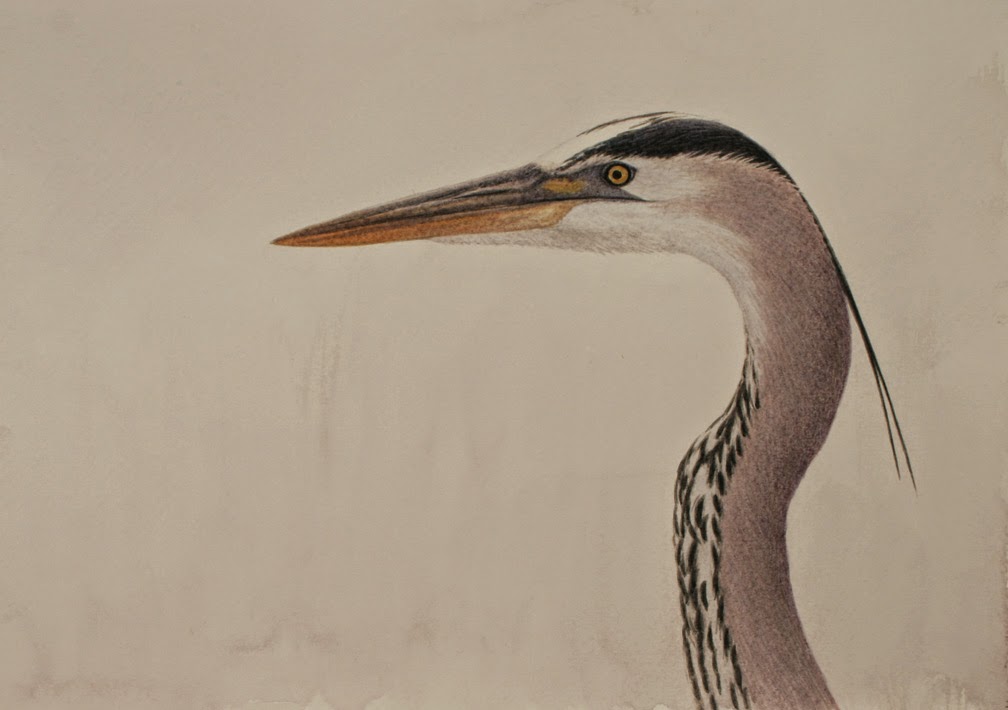 While down at the nearby lake some time ago, I sat sketching and painting a Great Blue Heron that was resting on the opposite side. The day was warm with clear blue skies that seemed to go on forever and occasional bird song came from nearby along with the calls of Song Sparrows in the bushes close to where I sat. I had almost finished one sketch when I noticed the heron beginning to twist its neck in a most peculiar way - something that I had never observed before so I made a quick drawing of it. 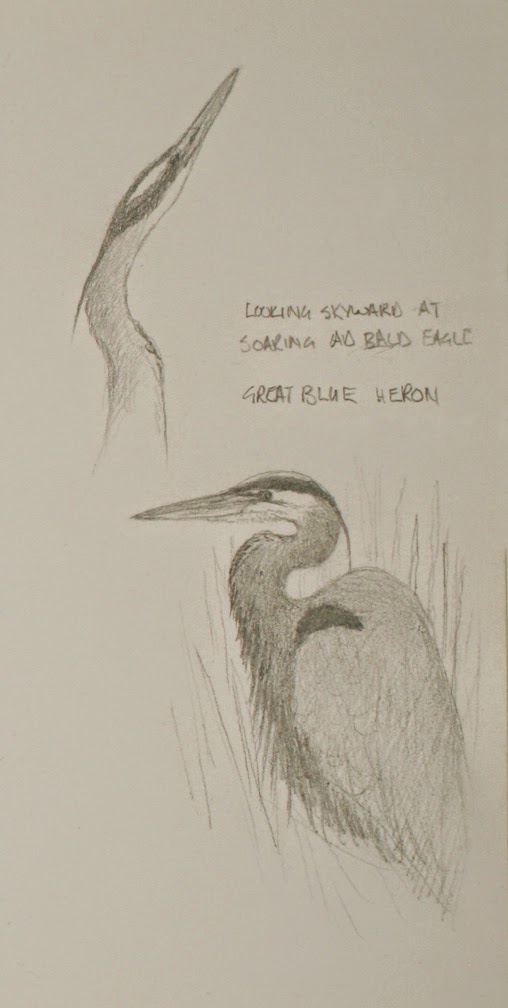 At first I thought that it had seen some prey item on a nearby sapling but it made no move other than a further twisting of the head. After some time I realized that in fact it was looking up into the sky so I lay back in the long grass to take a look. Almost immediately I saw an adult Bald Eagle soaring at a great height overhead. Grabbing my binoculars I watched the bird sailing through the slight breeze without a single wing beat moving slowly to the South until after a few minutes it merged into the haze. 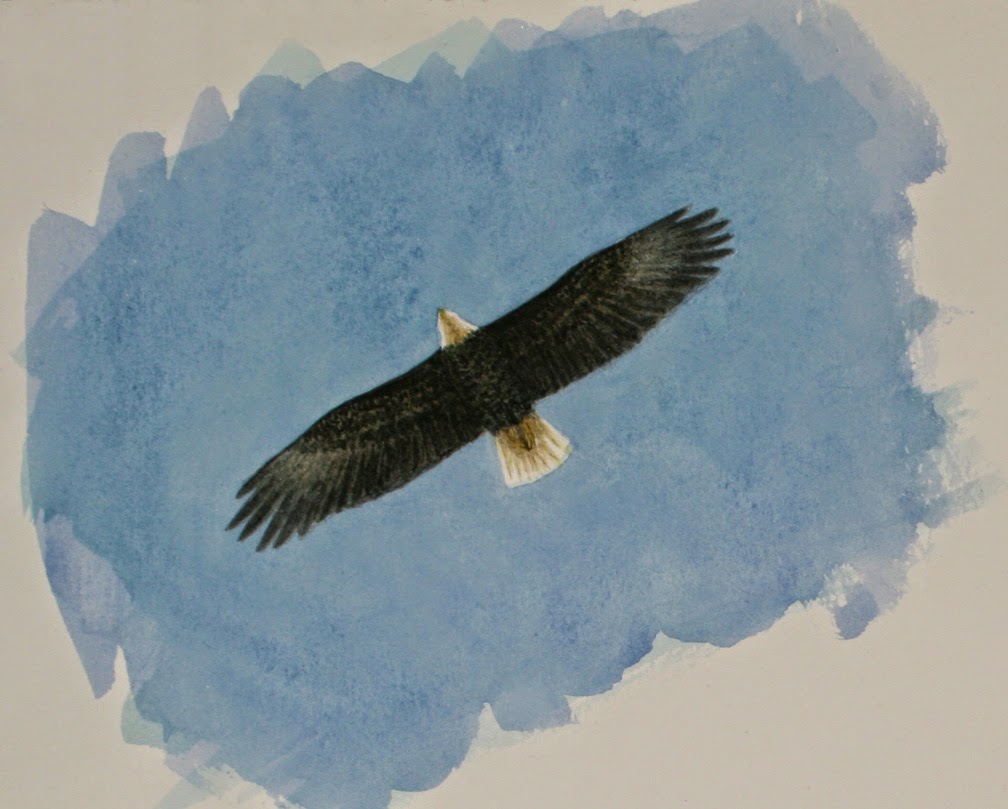 The lesson for me was that birds are far more aware of their surroundings than we are and without the telltale skyward look of the heron, I would have had no idea that the eagle was there. Now sitting indoors on yet another wet and windy day, I wish that the rain would stop so I could go back to the lake and take in some of the Spring migrants. All artwork done in my sketchbook, various sizes.
Posted by Jeremy Pearse at 7:57 AM 2 comments: 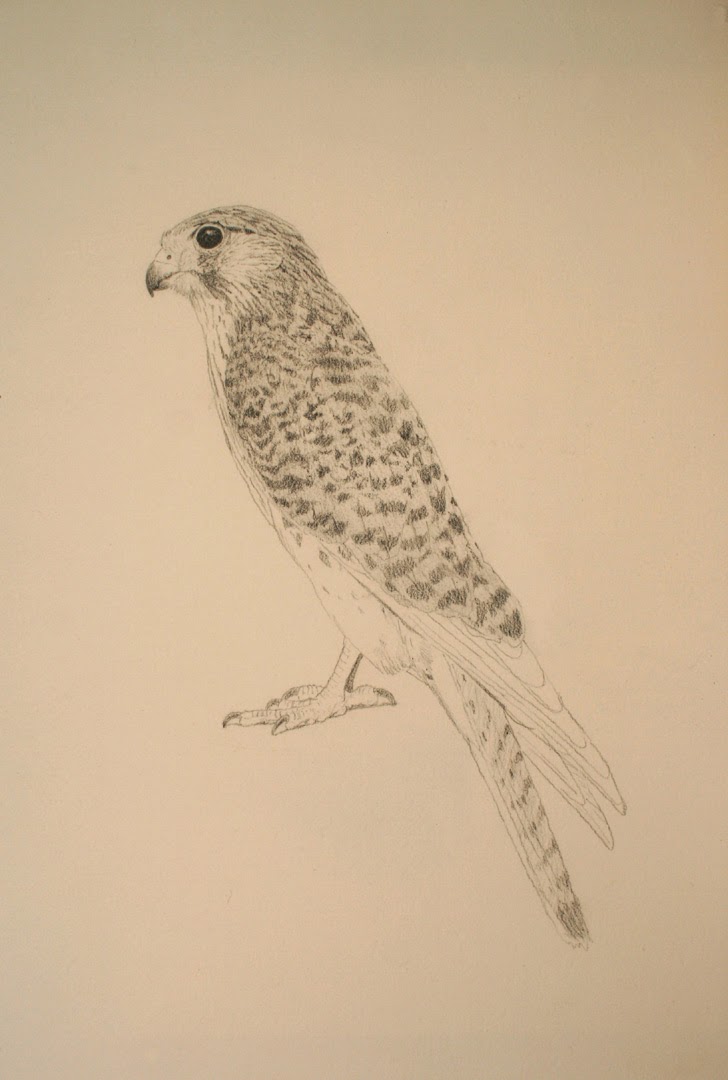 This drawing done on watercolor paper was from a bird held captive briefly before being released back into the wild. It proved a perfect subject as it sat calmly while I drew and painted nearby. These chance encounters are important to the artist especially as birds seldom keep still for long. Much can be learnt by careful study and observation and I am pleased that I had the opportunity with this bird. Size is about 20" x 13".
Posted by Jeremy Pearse at 9:29 AM 3 comments: 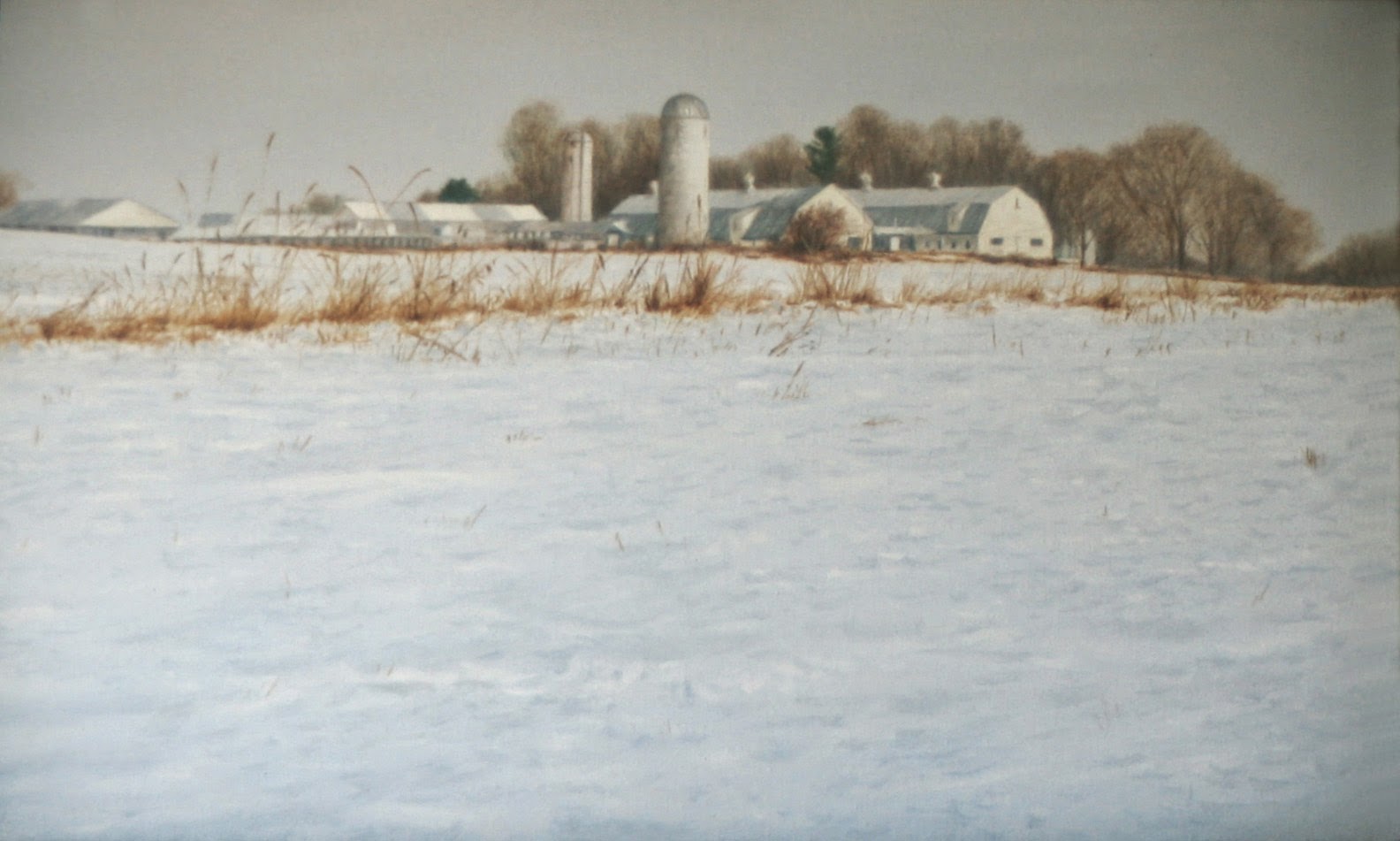 This view of nearby farm buildings is of the same farm that I posted earlier but this time looking from the opposite direction, almost due North. I was taken by the way the early morning light shone on the ends of the long barns and highlighted some of the more distant roof tops. I also enjoyed the slightly lower elevation here looking uphill and taking in the foreground grasses as well as the textures in the snow. It was a fun painting to do and completed as a smaller study. I always planned on doing a larger version so this one will be another painting that I'm waiting to get to. I apologize for the slightly lower quality of photo here, it was photographed on slide film and I really need to get it scanned professionally. Dimensions; 9" x 12", oil on canvas.
Posted by Jeremy Pearse at 7:48 AM No comments: 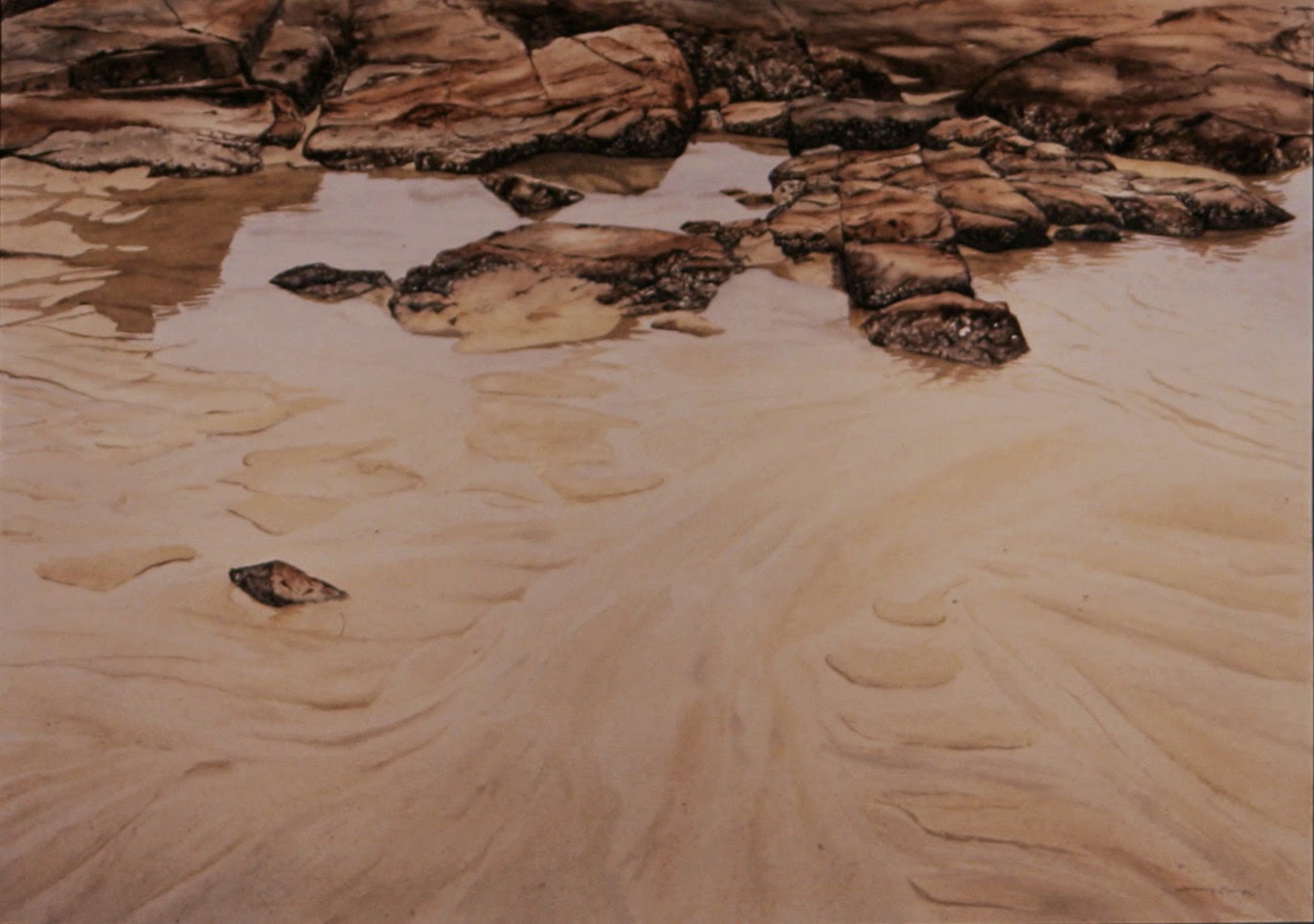 Living next to the sea as I did for so many years was a special and enlightening experience. Here I could sample nature in all her differing moods and spent many hours walking the shoreline. On one occasion, I came across this small tidal pool and did some small studies before starting this larger watercolor. The foreground directs the eye upward and into the painting with the subtle lines of draining water through the sand. The small ripples on the right are very important to this work also as they keep the eye inward too. I was especially pleased with the mood of this painting and didn't include any birds of other such seaside life as I felt this would only detract from what I had set out to do. This watercolor is about 22" x 30".
Posted by Jeremy Pearse at 9:10 AM 2 comments: 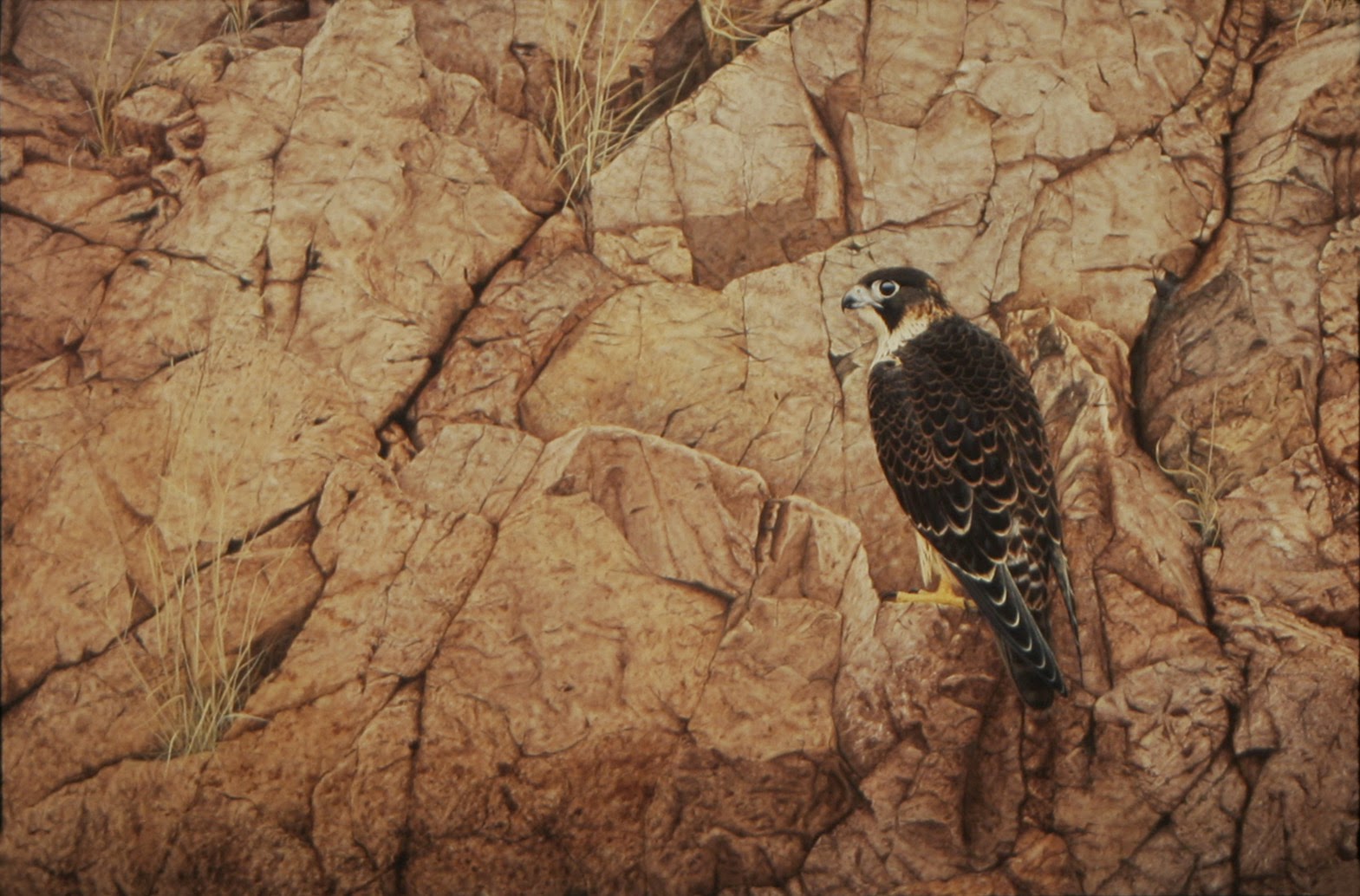 Another painting completed some time ago but recently scanned onto disc so I'm able to post it here. This young peregrine has left the nest and is now finding its way on its own. I wanted to pose the bird against a cliff face as to give some indication as to the place it was born. A few stray grasses give some extra spatial definition to the scene and I used diagonal cracks in the rock for a little movement. Otherwise a simple composition but one that was carefully thought out. 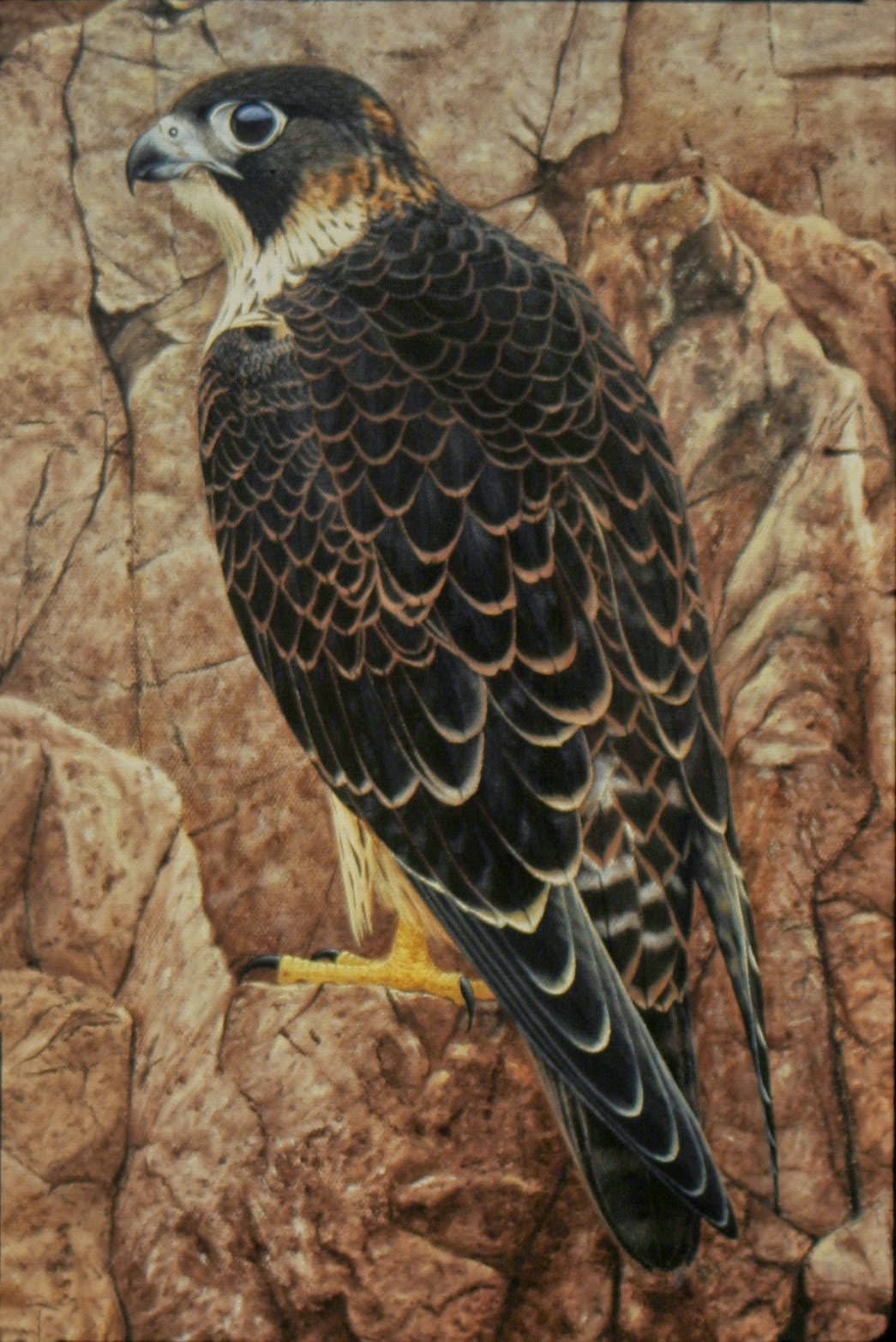 With all the snow and cold weather we have had this winter, I just had to post a seasonal painting. This one was completed some time ago and has since sold. The farm is not that far from where I live and having driven past many times, I stopped and did some studies etc before starting the actual painting. In this work I wanted to capture the feeling of an evening sky in winter against which the farm and surrounding trees could stand out. Unfortunately the surrounding area has been developed so I am glad that I captured the scene when I did as so many of the farms around here have gone. The painting was done in oils on canvas, size 20" x 40".
Posted by Jeremy Pearse at 10:44 AM 4 comments: