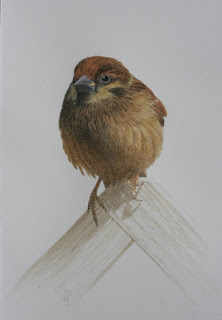 During dim sum with friends at Sai Kung, Hong Kong, a small party of Tree Sparrows were hanging around the lunch table. At first I "accidentally" dropped a few sesame seeds on the floor and in a quick rush, 4 or 5 sparrows grabbed them. After that more crumbs made their way onto the floor and soon the sparrows grew a little bolder. At first they were right under our feet but then began perching higher up on one of the chairs and also on the fencing between the eating area and the beach. This is where I drew and painted the individual seen above. I noticed how dark they were as soon as I saw them. Compared to other Tree Sparrows in Hong Kong, the pale areas around the face should be white and the breast a slightly warm grey whereas on these birds, they were much darker. On some birds, their plumage looked very oily and I came to believe that this (and their darker plumage) was from their diet. We often saw them on the cart that carried the used dishes and they were into what ever was left over from previous meals, including the small dishes of sauce that always accompanies many of the dishes served during dim sum. Mostly these sauces are soy based but there is also "ketsup" - similar to soy but with a sharper more vinegary taste - probably like HB sauce. Anyway, my point is that all of these sauces are very dark and much like shrimps give flamingos their feather coloring, I felt that this was darkening the plumage of this small party of Tree Sparrows. This painting was done in watercolor on Canson paper, size 7" x 5" (18cm x12cm). I titled it "Passer montanus soysauceus". Private collection.
Posted by Jeremy Pearse at 9:04 AM 3 comments: 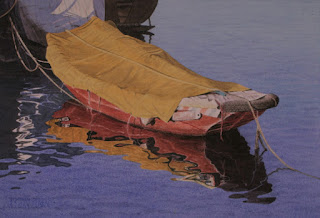 Finally the completed painting. Most of the time spent during this stage was on some of the finer details that brought it all together. The tire that had been nailed to the bow of the boat was finished off along with some of the shadows here and there. A few washes of ultramarine on the water deepened the tone appreciably, I followed up by adding some ripples. Then it was on to the area to the left of the boat making some of the reflections darker and to finish off, I used a stiff moist flat brush to remove some of the yellow paint on the awning to represent the rope that ran from bow to stern. This is probably one of the brightest paintings I have done in watercolor and it only came to me later on when I had the piece sitting in a frame that the work combined the three primary colors - red, yellow and blue! Now that this one is finished, I have an added incentive to look at the first one in the series and hopefully get that one completed too. The size is 7.5" x 11" (19cm x 28cm), watercolor on TH Saunders paper.
Posted by Jeremy Pearse at 6:52 PM 2 comments: 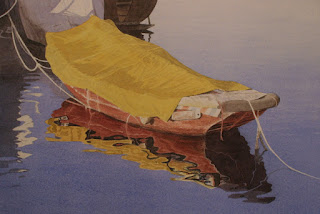 Time spent working on the water is slowly bring this painting to completion. For the most part, the reflections are finished but the area between the boat and the darker reflection on the left will need darkening. I have also worked a bit on the awning completing the shadows and most of the creases etc. I still have to darken the upper right and should get that area completed next. Almost there now, just a few details left.
Posted by Jeremy Pearse at 5:27 PM No comments: 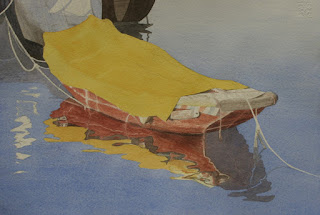 Things are proceeding slowly at this point although I am happy with the way the water is turning out. I feel that the upper right is still a bit too light in value but a few washes of thin blue later on should take care of this. The areas of white in the water on the left hand side are reflections from the larger junk behind the sampan and help to add interest to this section. I plan on washing in some quite dark tones around them next. I have darkened the boat a little and also worked on the reflections at the same time, also some of the smaller details are coming along. The value in this photo is closer to how it actually looked at the time - the earlier pics were a bit dark.
Posted by Jeremy Pearse at 1:09 PM No comments: 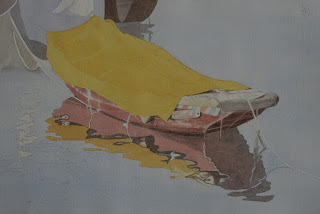 At this point I am trying to cover the whole painting with at least one wash of color - hopefully making it easier for me to judge the tones on and around the boat itself. So far all seems to be going to plan. I used a thin wash of ultramarine blue for the water but there will be quite a few more washes to come as I want the color to be graduated from front to back. Some of the reflections are getting there at this stage but I still need to make them darker and to clarify some of the details.
Posted by Jeremy Pearse at 12:19 PM No comments: 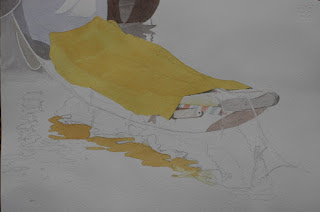 Here I have started on the first few washes of color. At this point, I'm not thinking too much about how it will look when the painting is finished, rather just working along and adding some of the darker tones to better judge all the other tones against. I think even at this stage, you can see that a sampan is starting to emerge from the paper. I lazily thought of using white gouache for the ropes and other lines etc, but just couldn't bring myself to do it. So I carefully painted around all the white shapes that you see. Even at this point, I was pleased with the design and composition - quite a change from my struggles with the earlier painting!
Posted by Jeremy Pearse at 1:40 PM No comments: 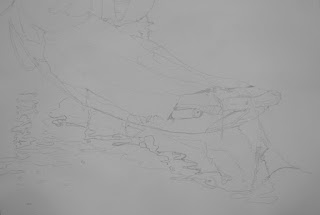 Whilst in Hong Kong and in between hospital visits etc, there was plenty of time available to paint and since the hotel room had a nice desk near the window, I was able to work quite happily. Initially I was working on a painting of a waterfall that wasn't working out so I turned the paper over and started a new drawing for something I had seen a few days earlier. As is usual with my underdrawings, I kept it light and drew the reflections in the water in a somewhat simplistic manner.
The subject here relates back to a project that I had started a few years ago which I called "The Covered Boat Series". The idea happened like this: while walking along the Hong Kong Island harbor front, I came across the Causeway Bay typhoon shelter which held a number of different-sized boats - from smaller sampans to larger junks and fishing boats. It seemed that at the time most of these boats weren't being used and instead were 'wrapped' for want of a better word, in canvas and sheets of colored plastic - mostly I think to keep out the rain. Some of the boats were used as storage with all kinds of junk and wood piled up inside. Anyway, for me they were something completely unexpected and aroused my interest from an artistic point of view. The first painting in the series didn't get that far as I made a mess of the water so it remains in no mans land. Hopefully now that this smaller painting that I started here is finished, I'll be able to take another look at the older one and be able to save it from the scrap pile.
Posted by Jeremy Pearse at 1:04 PM No comments: 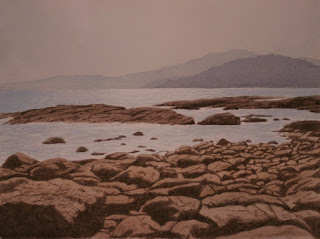 Having been away from the studio for almost 3 months, I am now back home and able to start blogging again. Due to a family emergency, we had to leave unexpectedly and took up residence in Hong Kong where M could look after her ailing dad. When I was not visiting the hospital, I mostly painted and completed around 20 paintings so have a lot to show you. This small study above was done after a boat trip around the Eastern waters of Hong Kong where there are a lot of amazing islands and interesting rock formations. Here the scene is from one of those islands looking into the sun at the distant landscape. I tried to capture the feeling of the sunlight on the water (which doesn't come across that well in the photograph) along with the rocky shoreline. I love places like this and have spent many hours exploring the small bays and beaches of Hong Kong. This watercolor is 5" x 7.5" (13cm x 19cm).
Posted by Jeremy Pearse at 5:42 AM 2 comments: