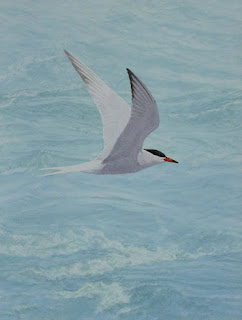 Terns in their breeding plumage are looking spectacular at this time of the year in their grey and white tones with black caps and bright beaks. I have wanted to do this painting for some time and finally finished it a few days ago. Size is 12 x 9 inches, watercolor on Grumbacher paper.

Posted by Jeremy Pearse at 7:03 AM No comments: 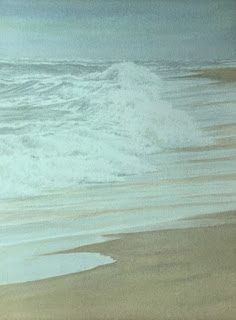 I like to walk the beaches after a heavy storm. All kinds of things are washed up on the shore and the wind is usually still strong and blustery. I love these bracing conditions with the pounding surf  and atmospheric skies. The waves can be incredible and this is what I tried to capture in the small watercolor shown here. Size is 11 x 7.5 inches. 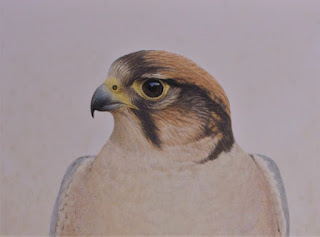 I have been working on this Lanner Falcon study from a bird I saw in South Africa. It has taken some time to get the painting to this stage and I'm hoping one more session will see it finished. Watercolor on Canson Matboard. Size is about 9 x 7 inches. 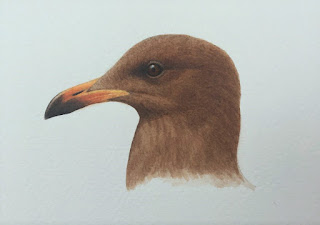 On March 31st, I was looking out of my studio window when I saw a dark bird in flight with about 15 or so Ring-billed Gulls. It was quite far away on the other side of the harbor - through my binoculars, I watched it for about a min until it disappeared. The next day, we crossed the harbor on the ferry and I again saw the bird hanging around Pier 5. After returning with all my gear a bit later, I re-found the bird nearby at around 2:00pm. I made sure I took plenty of notes then some field sketches were done and many photos taken. On returning home, I confirmed the bird was a young Heermann's Gull. This bird is usually found along the pacific coast. While there is some debate as to it's actual age, I initially thought it was a first winter/summer bird but it may be a 2nd winter as some adult inner secondaries are coming through. Anyway, I contacted the secretary of the Maryland Ornithological Society and the word was put out. Fortunately the bird was not hard to find and many observers saw it on the 31st and also over the weekend. This will be the first accepted record for the state of Maryland.

I did the head study shown above shortly after discovering the bird - watercolor on Grumbacher paper, size is about 5 x 7 inches.

Posted by Jeremy Pearse at 6:38 AM No comments: