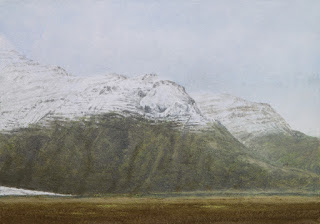 A few more paintings from our Iceland trip. Most of these were done in my sketchbook during the day, a few of the oils were completed when back home in the studio. I have kept the oils smallish for two reasons: 1, working at this size allows me to complete a painting in a relatively short period of time (I have so many ideas for future paintings) and 2, if successful, they serve as studies for larger paintings. The clouds in this painting were just clearing the closest mountain but washing away the top of the more distant one. I loved the way the snow brought out all the ridges, valleys and the very structure of the land. 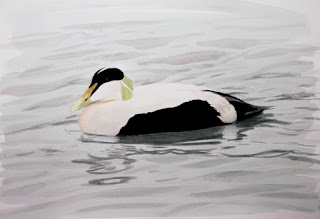 Eider Ducks were common along the coast and quite approachable. I was able to sketch and paint them from close-up noting many plumage details etc. Occasionally they would display with the male giving lovely cooing calls. Apart from some 2nd year birds, they were all paired up at this time of the year with the males in close attendance to the females at all times. 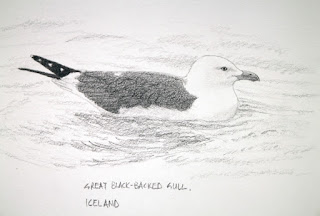 Almost as common but certainly not as tame were Great Black-backed Gulls. They looked magnificent while surfing the brisk winds we found in Iceland and were at times a welcome sight to a somewhat forlorn and severe landscape. 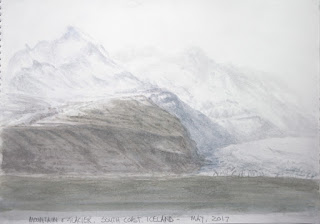 We stopped off in such a landscape as described above for a quick photo stop. It was still very cold in the wind and with intermittent rain. Higher up this precip fell as snow so most of the visible mountains were capped like the study done in my sketchbook shown here. Stunning was one way of describing the surrounding landscape. The glacier which appears in the lower right was some distance away but had drifts of snow and rain falling across it giving incredibly atmospheric views - something I hope to try and capture in a larger painting. 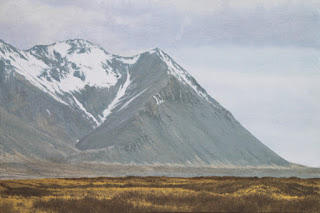 This larger oil was completed in the studio after we got back using the study I did of this scene shown in the last post. I tried hard with this one to more accurately capture the tones and colors of the mountains. Oh, to live and work in such a place! 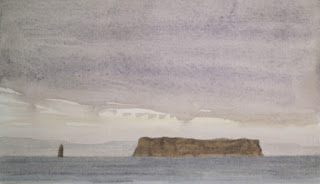 I saw this scene from the bus as we drove by so was only able to do a quick watercolor study in my sketchbook. Sometimes these studies are the impetus for larger paintings - usually though they remain as studies only. I still value them though - sometimes more than my finished work! I have other works of Iceland in various stages of completion so must give up a few days soon to finish them all off.
Posted by Jeremy Pearse at 2:56 PM 3 comments: