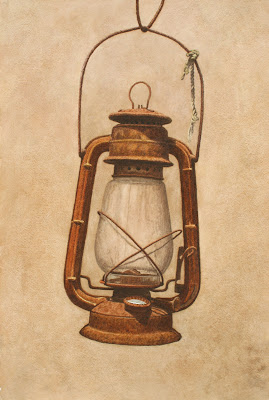 Here is the finished painting. I decided before I started to keep it simple because, as I mentioned earlier, it really is more of a pre-study and an exercise in understanding the shape and rusty finish of the lantern. In this final part, I slightly modified the background first adding a little more texture along the way then darkened the lantern's frame trying all the while to keep its rusty feel. The shadowed areas also went quite a bit darker using washes of sepia and burnt umber. I slightly cooled this mix using Windsor blue then did the glass keeping it somewhat dirtied and smoky as the original would be if used regularly. The tattered cord was washed over with cad yellow then the shadows laid in when that was dry. Attention to a few smaller details and it was done! Size is 22" X 15". 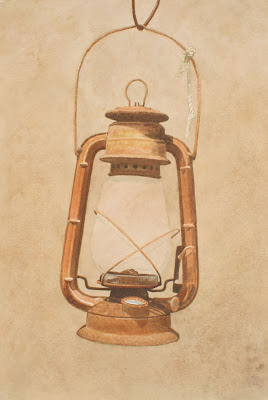 Here I have warmed the background wash further and also done quite a bit of work on the rusty sides and base. The shadows have been indicated but are not full strength yet neither for that matter is the amount of rust on the body of the lantern. The work seems to be heading in the right direction though so now it's just a case of continuing with the washes trying to keep things rusty and textured all along. I have also begun to work on the glass keeping it lighter than the background at this point but it'll have to be quite a bit darker, closer actually to how it looks at the base where it fits around the wick. I'm also thinking of going darker on the background too but I'll make that decision later when I'm almost finished with the lantern. 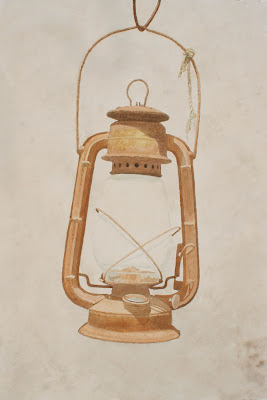 I found this old rusty kerosene lantern quite a few years ago and as I was planning on using it in a larger painting, I wanted to do a watercolor study of it as a means of better understanding the lantern itself and to see if it would work in the larger work. As usual, a careful drawing was done lightly on watercolor paper trying all the while to get the correct proportions etc. That part I actually enjoyed, then came the background wash which I let dry before laying in washes of burnt and raw sienna over the lantern itself. Cad yellow was added before this had dried to the upper part then more washes of burnt umber and a little sepia got the painting to where you see it now. Still quite a long way to go but I liked the slightly off-kilter attitude of the lantern as being so old, didn't hang straight anymore.

Posted by Jeremy Pearse at 7:44 AM No comments:

Like so many of my paintings, here is another that was mostly completed some time ago only to languish in the studio waiting for those final details. Seeing it recently and realising that the work would make a nice accompaniment for the 'Best of the Chesapeake' exhibition, I finished it off and sent it to McBride gallery. Unfortunately the image is not the best as I was in a rush to photograph it but I think you can get the general idea. The impetus for this work came from my fascination by the cloud pattern in the evening sky and the seemingly endless distance across the water. I kept the foreground grasses simplified with just a few posts as accents so as the keep distractions from the sky to a minimum. The oil is 5 1/2" X 13".

Posted by Jeremy Pearse at 8:00 AM No comments: 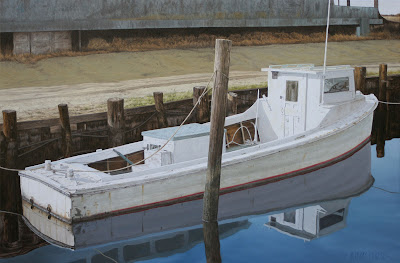 And here is the final painting! The sandy area behind the boat was finished first then the shadows completed before filling in the grassy areas just behind the pilings. I had been looking forward to doing the closest post since I had started the painting so was glad to actually complete that as well. I did a little work also to the hull of the boat and reflection trying to get a better balance between the tones and added the shadows of the mooring lines. A few touch ups here and there before painting in the aerial and the details on the roof of the cabin then I was finished. This was one a a few paintings done especially for the 'Best of the Chesapeake' exhibition at McBride Gallery in Annapolis, MD. The opening was on Sunday so please drop by if you are in the area.
Posted by Jeremy Pearse at 8:01 AM 2 comments: 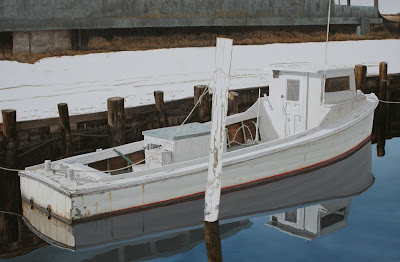 Posted by Jeremy Pearse at 7:50 AM No comments: 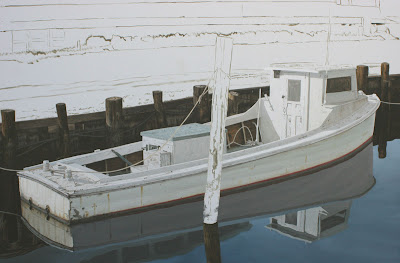 I have started adding some of the rust stains and damage to the hull trying all the while to create a realistic feel to the boat. After struggling with getting all the correct overall tones, these smaller details are the fun part! Then the final reflections were added but still need some work at this point. I'm happy with the cabin reflection though as this came out well but I'll need to finish the details in the windows of the cabin to really bring them to life. Some work has also been done to the mooring ropes using a pale warm grey and I'll get to their shadows later. 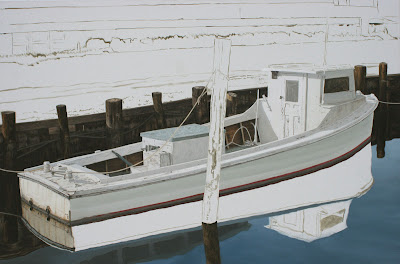 The water has been laid in using a mix of Cerulean and Ultramarine Blue greyed slightly with Raw Umber and lightened with white. I have also done the nearest piling's reflection but it is a little too brownish at the moment and will have to be re-painted later on to grey it down a little. I also have a feeling that the side of the boat is a little too light so this will need glazing to bring it down to the correct tone - I'll do that last of all so as to get a better understanding how much correction it will need. The plimsole line (waterline) was done with a mix of Windsor Red and brown then greyed slightly for the reflection. I'll also need to do quite a bit of work to various areas of the boat to represent peeling paint, rust and other damage etc.

Posted by Jeremy Pearse at 8:12 AM No comments: 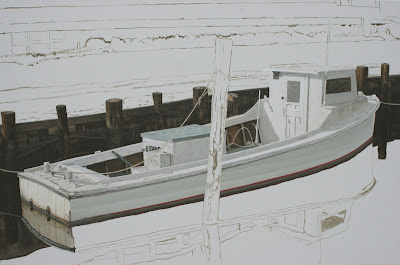 Up to this point, save for some of the smaller details and the roof of the cabin, I have just about completed the boat. Mostly the colors so far have been differing shades of grey dirtied up a bit at the stern with Raw Sienna and Umber. Rust stains and peeling paint have been indicated too trying to give the idea of a well-kept but used boat. The reflections are also coming along but still a long way to go. 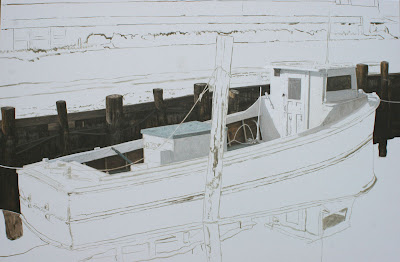 I continued indicating the darkest areas of the pilings behind the boat using mostly Raw Umber lightened with Raw Sienna and white. More areas of the boat were completed and the engine cover was done in cool greys mixing Cerulean Blue with Raw Umber. So far things were coming along as I had hoped - next finishing the complicated but interesting details of the engine control levers/dials etc and all that 'stuff' on the stern.
Posted by Jeremy Pearse at 7:12 AM No comments: 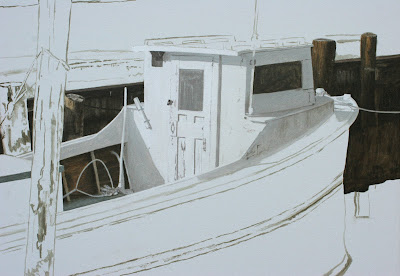 Here I have continued with the shadow areas of the boat and finished some of the peeling paint on the cabin door. The two pilings on the right have been finished along with most of their reflections. Mostly I have been using Raw Umber and Raw Sienna for these areas keeping things simple so as not to overdoing it. The inside of the boat just to the left of the cabin has been finished along with some of the interesting details but at this point they still need some work - I'll let the paint dry first. At this time, I'm thinking that I will probably finish the boat first then get to the background and then lastly the foreground - probably not the best way to go about it but there you are.
Posted by Jeremy Pearse at 11:51 AM No comments: 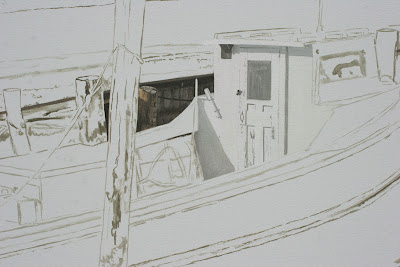 I apologize for the lack of posts lately but I have had a few crippling deadlines. Fortunately they have been met and now I have a bit of time to show you what I have been up to. The painting started here has kept me busy for the last month or so and I am glad that it is finally finished. I saw this boat out on the Eastern Shore of Maryland and thought at the time it would make an interesting painting. After gathering what references I could, sketches were made getting the composition as I wanted it then transferred to a 24" X 36" canvas. I drew in the structure of the boat and the other elements of the scene using thinned Raw Umber, all the while trying to be as accurate as possible - a badly-drawn boat is a sorry thing to see! When I was happy with the drawing, I started to add some paint. Usually I would do the background first but since I was impatient to get started, I dove right in to the boat itself laying in the brightest sun-lit areas then doing the shadows and part of the darker pilings behind. Off to a good start but still plenty of hours to go!

Posted by Jeremy Pearse at 11:42 AM No comments: