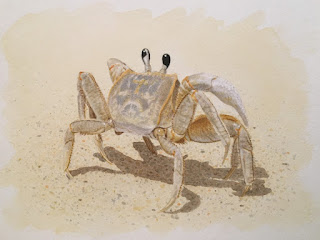 Ghost crabs were often seen as we walked along the shore. Most quickly disappeared into their burrows as we approached but some were caught out when we got between them and their holes dug in the sand. Then they usually would freeze and we could get a much closer look at them. 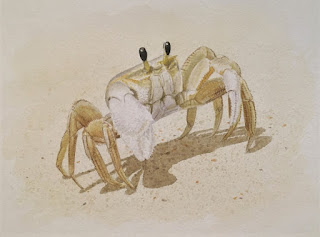 Occasionally, we would come across much larger specimens that simply stood their ground, pincers raised and at the ready! Two of those crabs are pictured here. Both done in watercolor on Canson paper, each around 6" x 9". 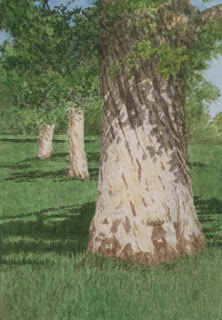 I saw these Eastern Sycamore trees lined up next to the path on a bright and sunny day in a nearby park so tried to capture the scene in watercolor. Size is 7" x 5" for this study.

Posted by Jeremy Pearse at 5:05 AM No comments: 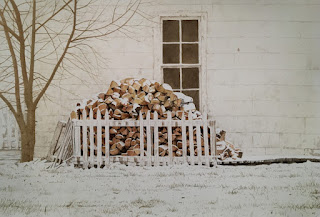 I finally managed to finish this one! There may be a little more work to do later but for now, I'll put it away so that I can come back in a week or so with a fresh eye and see if there is anything more I want to do to it (there usually is!). Size is 15" x 22", watercolor on Arches paper.

Posted by Jeremy Pearse at 6:31 PM No comments: 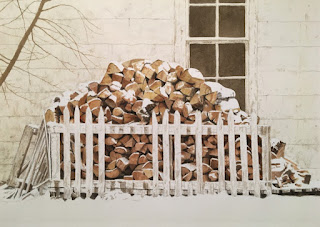 After a final pass, I think that I am about finished with the logs. Looking for something else to do after spending so long on the woodpile, I begin adding texture and various scuff marks to the siding behind, and also some smaller details around the window. The tree gets more washes and I begin to add branches although I haven't finished with that either! I'm hoping another session or two will see this one done as I have other work I want to get on with.

Posted by Jeremy Pearse at 5:02 PM No comments: 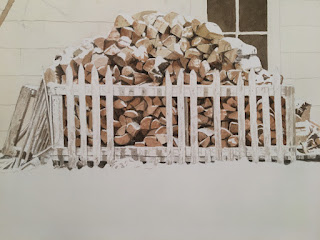 I have spent most of my time working on the logs slowly defining their shapes and adding a little more color. When I was happy with how they were coming along, I washed in a darker tone to indicate the window behind which helped give the painting a bit of depth - still quite a long way to go with this one though.

Posted by Jeremy Pearse at 6:21 PM No comments: