PATH TO THE WOODS 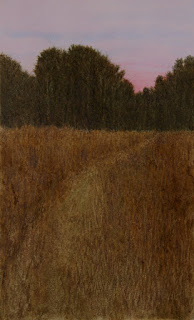 A small watercolor of an evening scene in the nearby reserve. We often walk along this way and in late summer, the grasses take on a wonderful tawny shade that seems to match the coloring of white-tailed deer perfectly. My highest count of a few years ago was 31 - mostly adult females but also a few young bucks. The population has declined lately - probably due to population control. But still, they are a welcome sight when encountered especially on snowy days when they are more easily seen and have no place to hide. I can sometimes approach them carefully then so long as I move slowly and keep my eyes lowered. If I stand still long enough, they will approach me instead, trying to make sense of my shape I suppose. I haven't really been able to draw them when they are so close as they see me reaching for my sketchbook and are gone - much of my work has to be done looking through my telescope from a fair distance.
Posted by Jeremy Pearse at 7:34 PM No comments: 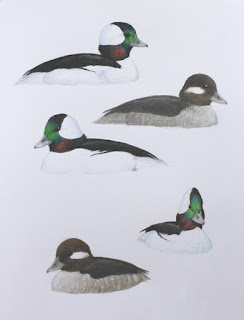 I managed a few sketches and paintings of the Buffleheads that were also present on the lake along with the Ring-necked ducks shown earlier. Most of the birds shown here are in full sun showing off the iridescence on the heads of the males. The females in comparison, are quite drab but retain their own 'cute' character. Quite difficult to capture in between dives and being quite small, the birds were active and full of motion most of the time. 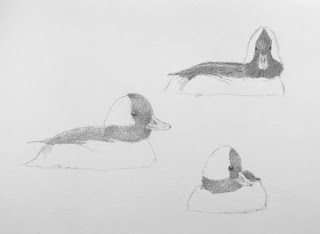 A few more sketches of males with their striking head pattern. This is easily seen from afar and the white triangular head-patch seems to glow with intensity. This was the first time I have drawn and painted these ducks and am looking forward to doing more. All studies shown here done in my sketchbook.
Posted by Jeremy Pearse at 8:20 AM No comments: 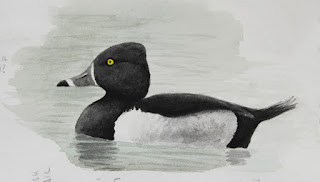 These ducks were painted in overcast conditions - it is amazing how much the bright iridescence of their plumage faded when out of the direct sun. Most of the males were diving to feed and just before they dived, they compressed their plumage, then relaxed it when coming back to the surface. Waterdrops just rolled off as their feathers are highly waterproof. After a period of feeding, they rested tucking their bills under the back feathers. 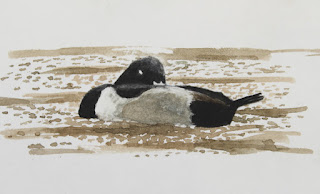 Keeping alert at all times was also a priority and there was always one duck keeping a watchful eye. They quickly became used to my presence as I was keeping a low profile, sitting still most of the time but they quickly became alert when a larger bird flew overhead - even if it was just a crow. 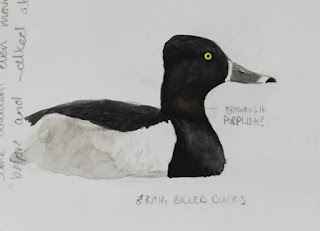 After preening vigorously, a further period of resting followed then more diving for food. Their schedule didn't change much at all during the day and since it was still cold, there was not a lot of courtship going on. All in all, a quiet but productive day down at the lake. 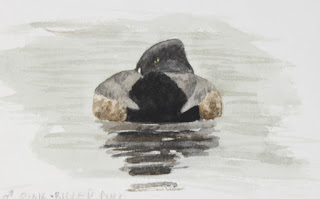 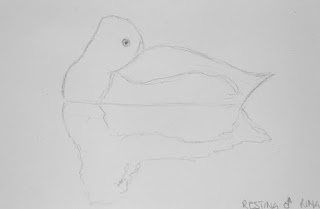 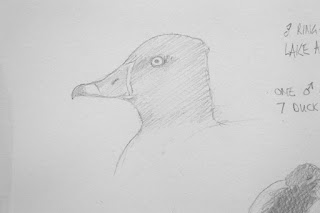 A few more sketches to finish off. Also present were a handfull of Buffleheads - I'll publish those studies in my next post.

Posted by Jeremy Pearse at 8:52 AM No comments: 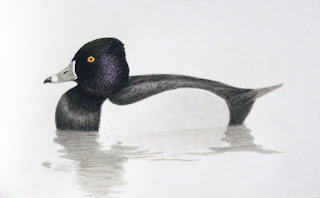 At the upper lake in the nearby reserve, Ring-necked ducks can be seen almost all winter. When the lakes freeze over (which usually only lasts a few days or so) they go elsewhere - probably to a much larger lake a few miles away where there is always open water. I think the draw of this lake is that there always seems to be waterweed on the bottom so attracts diving ducks such as these. We also get mergansers and these 'sawbills' feed on the fish although I have no idea how well these lakes are stocked. But I decided to concentrate on the ring-necks this time. 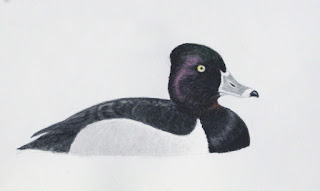 Through my scope, the iridescence on the head is more obvious and can be seen at its fullest when the sun shines directly on the bird. In shade or cloudy conditions, this feature is not so apparent but can still be seen. I sat with the sun almost directly behind me so as to make the most of the iridescence - it seemed that the head showed mostly bluish purple with perhaps a little green on the crown. The 'ring' around its neck is barely seen even in good light and is a slightly more reddish brown. There were males and females present but I only concentrated on the males trying to get a good 'jizz' in between dives (where the tail is usually on the surface of the water). When resting, the tail sticks slightly upwards. 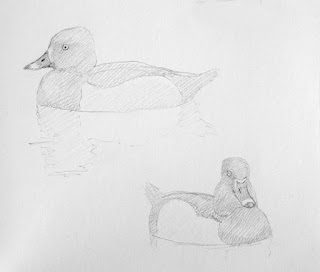 The sketches shown here are how my color studies usually start off and if I think I have a good enough likeness, I can start adding some watercolor washes etc. It usually takes a few goes to get more familiar with the shapes and character of each bird before I start to feel comfortable drawing them. As always, more practice is the key. All the above work done in my sketchbook - watercolor and graphite.
Posted by Jeremy Pearse at 9:06 AM 2 comments: 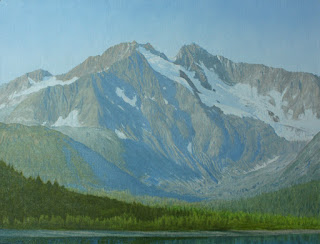 Finally got this one finished! A fair bit of care was taken when working on the foreground trying to keep a balance between it and the distant mountain. The darkest tones are apparent here but I kept the contrast between these and the lighter green trees close so as not to draw the eye away from the mountain peaks. Other details were added here and there plus a small amount of tonal adjustment in a few areas. I'll probably have another go at this as I think I prefer a more widened landscape format giving more prominence to the mountains - should work well with this subject. Size of this one is 12" x 16" (30cm x 40cm). Oil on canvas.
Posted by Jeremy Pearse at 6:11 PM 2 comments: