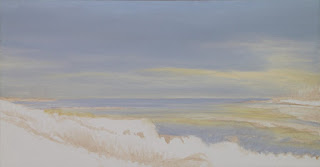 The start of a new painting based on my studies done over the past month or so. Here I have laid in the sky keeping it quite simple but offering a series of differing tones and colors in the sky to keep it interesting. 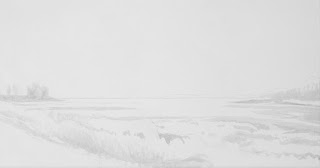 Here is the simple layout for the painting done in a thin raw umber wash laying in the key elements without too much detail. I want this painting to be an open view of the marsh typically seen on so many of my trips around here on the Eastern Shore.

Posted by Jeremy Pearse at 7:17 PM No comments: 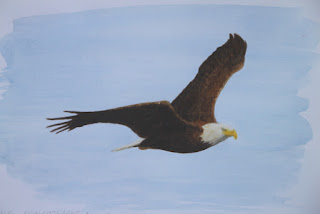 Bald Eagles are common around here with at least one bird seen every day and in late November last year, up to 8 were together at one time! I never tire of them but seldom get any close views - they are usually in flight or perched way off in the distance. My sketches of them have been hesitant and unfinished but I think I captured something of the powerful character of this bird in the above study. 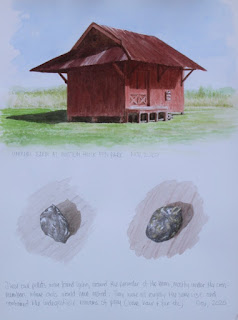 We visited the Mutton Hunk Fen Park for the first time last year (10 mins from us) and I found this unusual barn next to the parking lot. I did this study trying to capture something of the character of the place which had features I have not seen on any other barn. Later, walking around, I found quite a few owl pellets on the ground under the eaves where owls must have rested. I didn't dissect any of them but they usually contain undigestible matter such as fur, bones and feathers etc. 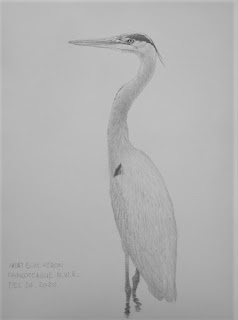 At Chincoteague, herons (and egrets) are common, and with the continued presence of people walking about, many of them become used to you and can be approached without them flying away. This Great Blue Heron was just by the roadside so I was able to get quite a bit done. 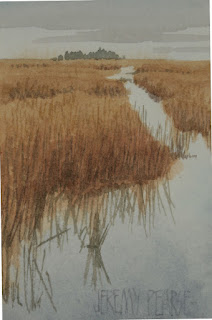 This kind of scene is common around here with the land being so flat, water goes everywhere! There are usually plenty of birds to be seen around too (also deer and wild ponies) so there is always plenty to look at. I think I have got some of the best reference I have ever found down here, hopefully all these studies will lead to some finished paintings.
Posted by Jeremy Pearse at 4:31 PM No comments: