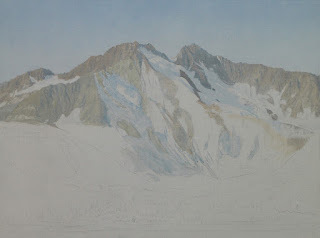 Working along the skyline, I continued developing the mountain trying to keep it interesting by using slightly different shades of warm grey and cobalt blue for the shadow areas. The snowy areas in direct sunlight was slightly warmed titanium white. Some smaller patches of snow will be dropped in later when the rocky areas have dried. Working down the mountainside, I slightly cooled the grey that I used for the sun-lit rocks and darkened the snow slightly in the shadow areas. So far so good - still plenty to do on this one but I'm happy with how it's going.
Posted by Jeremy Pearse at 7:22 PM No comments: 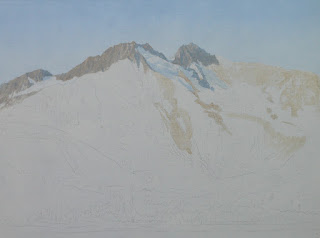 Having finished a few smaller studies, I felt it was time to tackle something a little larger. I had a linen panel lying around so after giving it a few coats of gesso, I did a full-sized drawing on scrap paper then rubbed the back with a soft graphite pencil. This was then turned face up and laid down onto the panel. I went over the lines again with a ballpoint pen which transferred the drawing onto the surface. I don't always do this usually preferring to draw directly onto the panel but I wanted a little more accuracy this time. I then laid in a graduated sky of pale cobalt blue and started on the rocks with a warm grey. Shadows were a shade of the same cobalt blue.
Posted by Jeremy Pearse at 7:12 PM No comments: 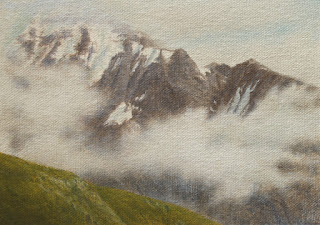 For the most part, we had good weather but with the occasional rainy period. Consequently there were many mist-enshrouded mountain scenes like the one in the small oil painting shown above. I was also able to capture more in my sketchbook and for the ones that changed rapidly, I took a number of photographs - not so much as something to work from, but more of a visual reminder that I could get to later. 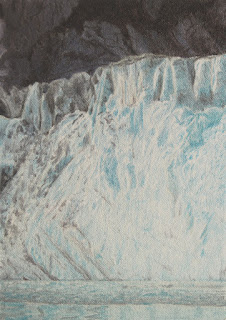 This small oil above was completed later mostly from a sketchbook study but also as an experiment to see how this glacier scene would look in a different medium. I'll either do a larger oil or a woodblock print of this. Frankly, there was so much to see, it was difficult deciding what to concentrate on. I found myself doing quick half-finished watercolor studies then rushing onto the next one while being distracted by something else! 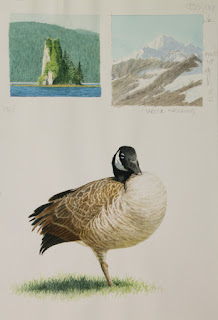 On this sketchbook page, there are two quick landscape studies and one of a Canada goose resting in the sunlight. As I had more time I was able to devote more effort to the goose study and later work on it some more in my cabin. I particularly enjoyed its half-closed eye and the drooping wing - all signs of a relaxed and contented bird. This was one individual of a small flock of 7 or 8 birds loafing on a grassy hillside. 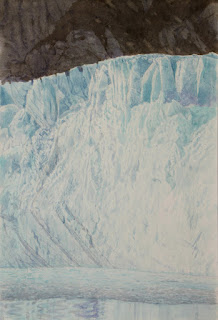 Here is the initial sketchbook study of the glacier scene shown in the small oil above. I find it worth while to do a few different studies like this and some even smaller ones playing around with variations in color etc. For me, it certainly helps cement the image in my mind and allows for a more natural progression from sketchbook to final painting.
Posted by Jeremy Pearse at 8:45 AM 2 comments: