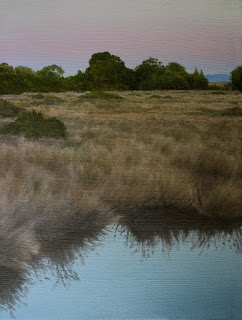 This is a recent painting done from our trip to Portugal. We spent about two weeks there travelling around and trying to see as much of the country as possible. Truly an amazing trip and are looking forward to going back. I enjoyed the South of Portugal the most especially along the Algarve which was stunning! I'll do a longer post on our trip once I have had time to finish off a few more paintings. This evening scene is set in a nature reserve close to where we were staying and completed what was for us a magical day. Size is 12" x 9" (30cm x 23cm), oil on canvas.
Posted by Jeremy Pearse at 8:09 AM No comments: 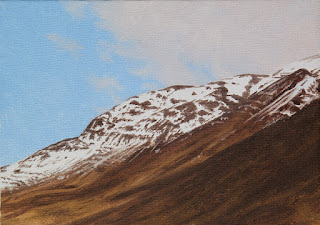 In my last post about Iceland I wrote that the paintings were to be the final ones from that trip but I have since been inspired to do a few more! The smaller study above was painted as I saw the clouds slowly coming over the top of a mountain that still had some areas of snow on it. I loved the contrast of the bright sun-lit mountain top against the blue sky and the shadowed lower slopes in the foreground. All the vistas from this area were quite magnificent as from where we sat, we had the mountainside behind us and incredible views across the fjord where more snow-capped ranges of mountains were laid out. Their tops drifted in and out of focus as clouds came and went. I'll add more of those paintings later. 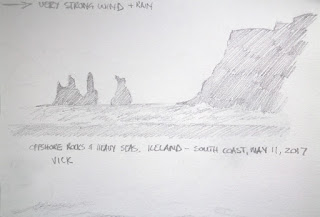 This smaller study was done in my sketchbook from our hotel room which fortunately looked out over the coastline. As mentioned in an earlier post, the seas were incredible with light but driving rain and our walk on the beach consisted of hanging on to each other so we wouldn't be blown over while scrunching up our eyes to help keep out flying sand and small pebbles which stung when they hit. Later I did a small watercolor of this scene (Rough Seas - Vick) and drew heavily from this drawing while working on it (painting shown in an earlier post).
Posted by Jeremy Pearse at 8:08 AM No comments: