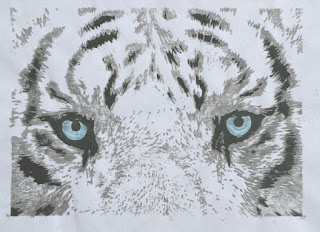 This took far longer than I had expected but after many experiments printing on different papers etc, I was able to do a complete print run. So far this is an open edition as I may use the image to do cards etc.  I did make quite a few mistakes along the way but I learnt a lot. So far I am happy with the design and carving of the blocks but realize I have quite a way to go with the printing process. I am getting better though and I know that things will be easier with the next print. 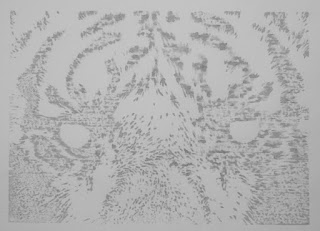 This image shows my first impression using block 1, and printing pale grey as the first color. The print shown here is a bit blotchy and this is due to two factors - the wood that I used for the block and also the paper which was Japanese Kozo printing paper - nice but a bit thin really. The wood blocks had quite an open grain so some lines appeared and also it was a bit soft for proper woodblock printing. When taking each impression, some of the pigment that was around the areas of the carved shapes bled into the printed areas causing yet more blotching which was very annoying. Using better wood should stop all these problems. Fortunately for me, quite a lot of this first layer will be overprinting with the next grey and eventually the black so I wasn't too worried. 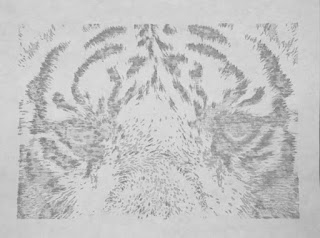 Here is the print after receiving the second color - a medium grey. This one went on a bit better but still had more texture than I would have liked. I printed each edition on dry paper which is not quite the correct way but as I am still learning, I wanted to keep each step as simple as possible. After completing each color stage, the prints were laid out to dry off slightly then stacked under some heavy books - this minimized any wrinkling. One other problem was that I initially printed the first two colors of 20 prints on the wrong side of the paper so these all had to be scrapped! Thankfully I was only half way before I realized!
When it came time to print the black, I had more problems. The main one was getting the ink to the right consistency. Since I am using the Japanese method of printing, the color is not rolled onto the block as in other methods but rather brushed on using a special brush so it has to be thinned. Dark colors can be a problem even for experienced printers and I ended up having to print the black twice. Still, not the end of the world and when I was happy with the strength of the black, I did the blue of the eyes using cerulean blue then set the prints aside to dry. Next I will sign and title the prints then enjoy the results of my very first woodblock print.
Posted by Jeremy Pearse at 7:38 AM No comments: