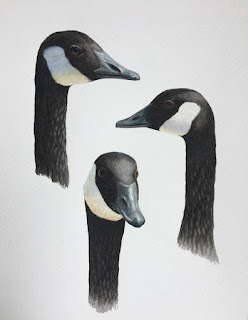 A short time ago, I came across a flock of Canada Geese feeding next to the path so settled down nearby. Soon some of them came so close I could actually reach out and touch them. I was able to get extraordinary views of these birds and spent some time sketching and drawing different individuals. Being in full sun, I was most interested in the effects of light and shadow, and how the highlights showed on their heads. Relying mostly on my sketches and studies, I completed this sheet when I got back home - I'll probably do more when I get the chance. Size is 12 x 9 inches, watercolor on Grumbacher paper.
Posted by Jeremy Pearse at 12:42 PM No comments: 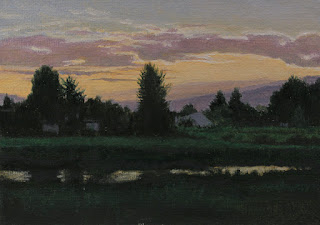 I did this landscape study for a commission arranged through Berkley Gallery. I often feel the need to do small studies such as this one both for the client's peace of mind, and for my own! They also help to bring together all the ideas (and hopes) that I have for the final painting. Although I seldom make an exact copy of any of these studies, they work well as a starting point. Size is 5 x 7 inches, oil on canvas.

Posted by Jeremy Pearse at 6:44 AM No comments: 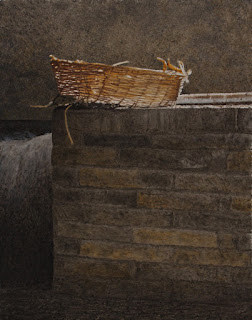 One of my favorite pastimes is exploring old places and discovering something new. I have spent many hours walking through ruins and other old buildings trying to absorb the atmosphere of times gone by. I came across this scene inside an abandoned house many years ago while hiking in Hong Kong - the old basket had seen years of use and was now falling apart. In the dim light of the interior, it somehow took on a different meaning for me as I thought about the people who must have lived there. Size of this painting is 14 x 11 inches, acrylic on board.

Posted by Jeremy Pearse at 6:48 AM No comments: 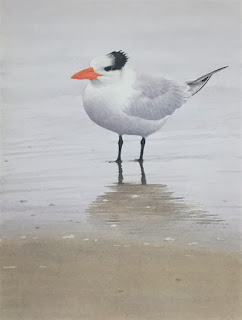 This Royal Tern was resting and preening in amongst other birds seen at the beach mentioned in my last post. My sketches and studies of it were looser than the Forster's Terns but one of my studies managed to capture a more interesting view so when I got home, I started this watercolor. I wanted the bird standing in very shallow water just on the edge of the sand with wavelets forming as the tide slowly came in. I worked hard to capture this idea putting down many washes and building up the tones until I was happy with the result. A few bits of sea foam completed the painting. Size is 12 x 9 inches.

Posted by Jeremy Pearse at 7:31 PM No comments: 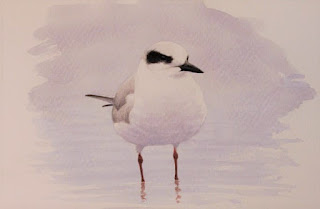 I noticed a flock of birds on the beach just above the waterline so slowly made my way towards them. Eventually I managed to get close enough that I was almost surrounded by birds then settled down so that I could study them. I chose Forster's Terns for my first watercolor paintings doing these in my sketchbook. 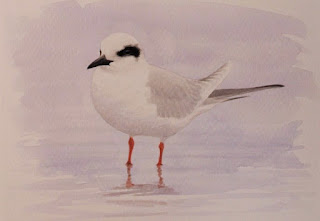 They were about 20 or so Forster's along with 2 Royal Terns, quite a number of Laughing Gulls and also lesser numbers of Ring-billed Gulls. Two Rock Doves also sat nearby. To start with, I washed in a simple background then tried to capture the overall shapes of the terns before adding any details (the lower bird had reddish legs for example where most of the other birds legs were black). Both these studies done on Grumbacher paper, size about 6 x 9 inches each.

Posted by Jeremy Pearse at 7:29 AM No comments: