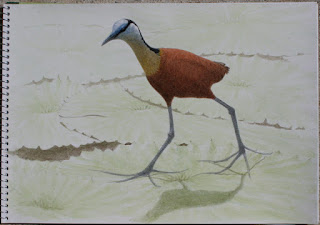 During a recent trip to South Africa I managed to find some time to do quite a number of sketches and watercolors. Most of these were in my sketchbook but I have to say that after such an amazing trip, (during which I lost count of the number of photos I took), I think that I have enough reference now for a few years worth of work! So I'm sure a lot of these sketchbook studies will translate into larger oil or watercolor paintings at a later date. I also painted a few landscapes and will re-visit these when I have finished my current project. 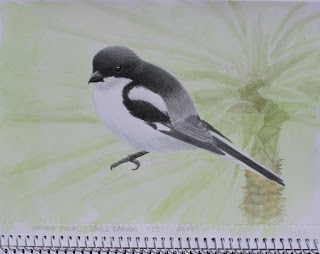 Birds featured prominently although I did sketch and paint a few larger animals including elephant and hippo. We traveled around quite a bit visiting Kruger Park for a few days and also spent some time at Giants Castle (more about these trips later). Also a few shorter day-trips were undertaken and the bird count continued to rise - with a few welcome 'lifers' too. 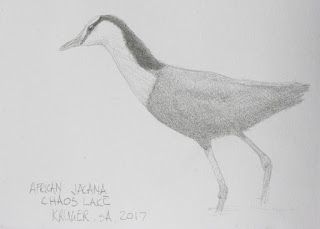 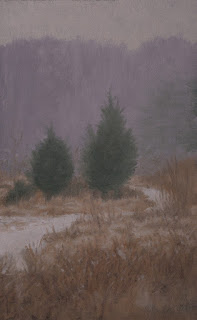 As far as snow goes, this has been a milder winter than usual with no major snow storms. It has been cold though and spring has taken a while to arrive. Warm fronts from the South usually brings a more moist atmosphere and sometimes this combination results in mist. I am always over in the reserve when this happens looking, sketching and when the temps are mild, painting. This smaller study didn't take long so was able to mostly complete it in one go. I did a few small touch-ups later when the paint had dried a little but basically left it as it was. Size is 7" x 5". Oil on canvas.
Posted by Jeremy Pearse at 6:16 AM 2 comments: