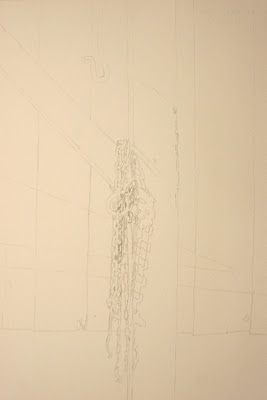 Here is the start of the new painting. I took some time at the site to carefully draw the chains and the shadows just as I saw them making a few mental notes as I went along. The background boards I didn't worry so much about as the shape of the paper was going to dictate how I drew them. At this point I was going to refer less to what I saw at the scene and more to what I wanted for the painting. I moved the upper hook a little further to the left away from the main post as I felt it was a little too close in the study (another great reason for doing smaller studies before working on larger paintings). After deciding where the lower edge of the boards in the background were to be, they were drawn in and I carefully placed the line of shadows above trying to get the balance right. In the studio, I stretched the paper then washed over a thin layer of Raw Sienna and let it dry overnight. Next getting serious - laying in the first of the background washes.