DAWN OVER THE FRASER RIVER 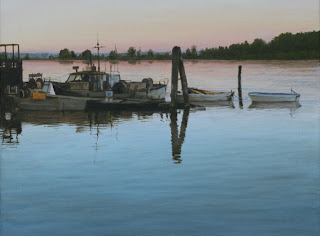 I saw this scene on my first day in Canada. I awoke before dawn and stepped outside just as it was getting light. Fortunately the Fraser river is easily accessible from where I was staying and that early, the world seemed calm and quiet. As I walked along the banks, I discovered these boats at mooring. I explored the scene from a few different angles then just stood and watched the new day being born. A crow called and a bald eagle flew past heading upriver. From the nearby woods I could hear the song of a Swainson's thrush and faintly across the river came the bleating of sheep. While I made studies of the scene, the sun began to rise highlighting the trees on the far bank, the light and colors were incredible. I spotted another bald eagle sitting on a post in the distance and geese flew slowly downriver calling. It was one of those special mornings that will stay with you for a very long time.
When working on this painting, I was first attracted to the almost abstract quality of the scene and did the smaller study first as a way of exploring my ideas about what I wanted to say. It was a very enjoyable painting to work on and I plan on doing a larger version soon but this oil is 9" X 12".

Posted by Jeremy Pearse at 6:17 AM