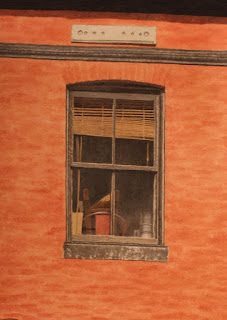 The third in the window series and the one that I spent to most time on. I moved in a little closer for this painting choosing an upper-story window in direct sunlight which allowed me to see a little of the interior. The bricks are a little darker than in the Library Window painting that I did earlier and using the same technique, I loosely indicated the brickwork then began working on the interior. Most of what I could see indicated that this was a storeroom of sorts as there was quite a bit of piled up stuff inside. The half-opened blind took longer than expected (actually the whole painting did) but eventually after many washes of color building up the tones and textures over the whole work, the painting was finished. Size is 15 x 11 inches, acrylic on Strathmore paper.

Posted by Jeremy Pearse at 3:49 AM

I think windows and doorways have so much potential - the ochre shades here look like the Wild West. (but I know you’re in the Eastern USA)