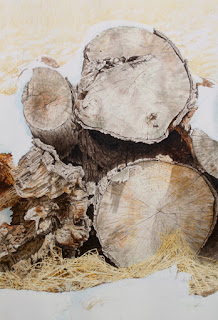 Finally finished this one. Took a little longer than expected but I'm happy with the result. For the most part, I kept the painting where I could easily see it between stages so as to give me a better idea what to do next. Some areas needed darkening while I some others a slight lightening. The background was finished off with the addition of pale yellow grasses - this helped define the upper edges of the snow and also added a bit of perspective. I had to re-visit the grass in the foreground and played around with that area for awhile until I was satisfied. This painting is part of a long-term project so will be put away until I get closer to the end of it. When I have enough work completed, I'll explain in more detail, for now it's on to the next one! Size is 22" x 15" (56cm x 38cm). Watercolor on Bockingford paper.
Posted by Jeremy Pearse at 6:35 PM