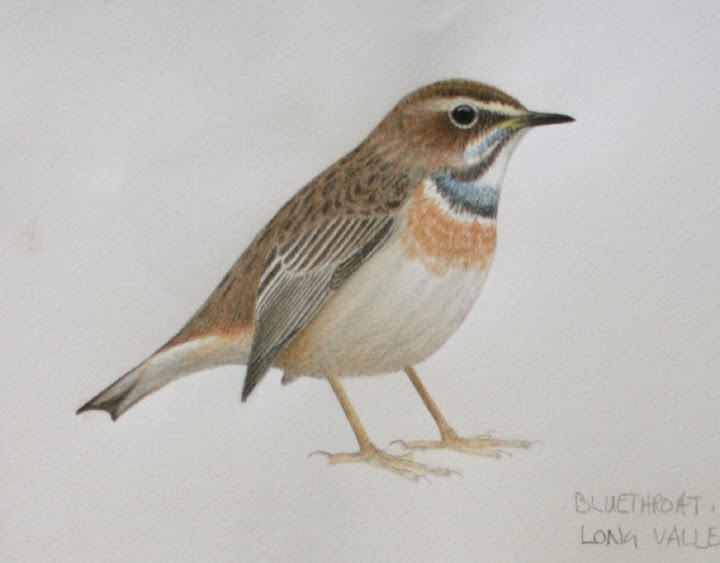 While recovering in Hong Kong, I was still able to do quite a bit of birdwatching thanks mostly to Richard and his network of birding friends. In fact, Jan was quite an unusual month in Hong Kong with regards to rare birds, I think that a total of 11 species were seen in the territories that were either a first for Hong Kong or uncommon enough to be of special note. Although we didn't get to see all of these, my total count for birds new to me during Jan/Feb was 11! Often when returning home from a day out, I would sketch these new birds in my sketchbook or finish off the ones I had done in the field. The Bluethroat above was one of these. While I had seen quite a few of this species in the past, I don't think that I have ever painted one. 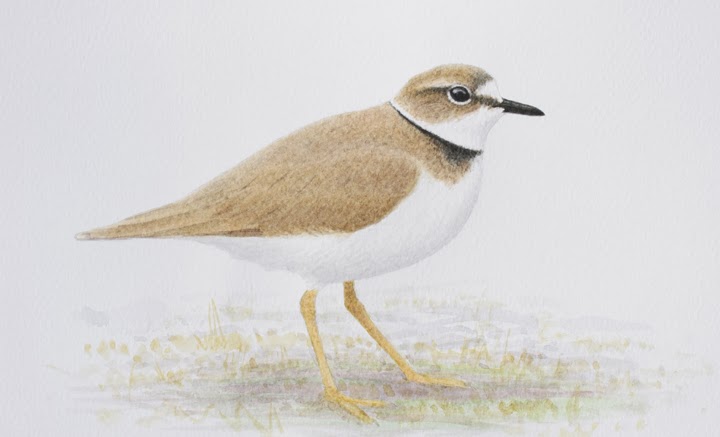 Hearing about a Long-billed Plover seen not far away, we jumped in the car (well for me it was more like a hobble) and sped off, fortunately the bird was still there when we arrived and great views were had by all. It was associating with a small party of Little-ringed Plovers and at first took some separating from them. Once the characteristics were learnt though, it was much easier to re-find the bird when scanning through the birds.  Also seen near the plover was a Blyth's pipit so two great birds were had in one day! Both the above studies are about 5" x 7", watercolor.
Posted by Jeremy Pearse at 7:44 AM

Love the watercolors, especially the subtle tones of the plover. I still have never seen a Bluethroat although I have painted a few.

As always John, many thanks for the comments. I do love Bluethroats too, especially the males in breeding plumage - simply stunning birds if you ask me!