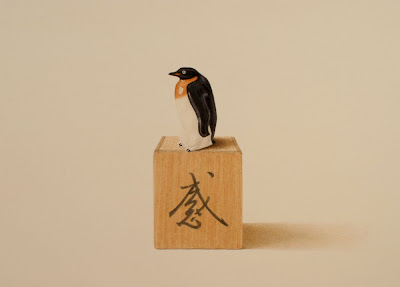 First I would like to wish you all a wonderful New Year - may it bring you all peace, health and happiness! Like so many I have made a list of new year's resolutions, let's see how long I can keep to them!
I have had the box featured in this painting with me for some time, the penguin figurine for less so but I thought that they would work well together. So after trying a few different compositions, I came up with the one I liked best then made a careful drawing onto hot-pressed Arches watercolor paper. After stretching, the paper was washed over a few times with Raw Sienna then I began work on the box. More (but slightly darker) washes of the background color were added then I did the wood grain before touching in most of the smaller details with a finer brush. The figuring actually took much longer that I had thought as there was some careful modulating to see to then the darker tones were built up over time. Finally the eye of the penguin and the shadows were built up. Sometimes the simplest compositions are the best and I had in mind the work of Alan Magee while I was working on this one. Size is 10" X 12".

Posted by Jeremy Pearse at 2:54 PM