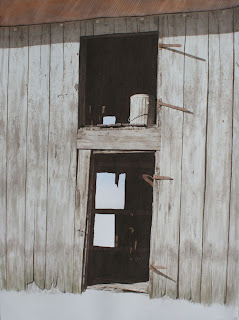 A step further on now and I have mostly concerned myself with a series of washes to define the boards and the rusty roof. I have also used quite a bit of drybrush technique for added texture etc. Darkening the shadows has also helped too and quite a bit of time was spent working on the old bucket as it was to be the focal point. The shadow of the handle that falls across the side of the bucket was very carefully put in and I also defined the shadow on the lower edge of the handle itself to help it stand out against the side. A very subtle green was added to the bottoms of the lower boards to represent weather staining and rot but I may make this a bit stronger as the painting doesn't have much colour. Not that this is a bad thing but I'll finish the ground first and then see how it looks. To get to this point it has taken me the better part of a month! On reflection, I'm not sure why it has taken me so long. Admittedly, there has been time spent away from the painting working on other things and I have also spent quite a bit of time simply looking at it deciding where to go with it next. I'm still not totally happy with the shadow areas inside the doors as the view here is different from the earlier version and you can see where the boards have broken away from the far side allowing a peek right through. So more time will have to be taken to hopefully come to some sort of decision about that. Still, so far I feel it is going along the path I wanted for it and hopefully I'll get it finished soon.
Posted by Jeremy Pearse at 8:46 AM

Hey Jeremy, Like the very abstract design of this one. Also all that brilliant noodly stuff in the boards. This is going to be one of my favorites, I have no doubt.

Thanks Terry, hope you like the finished painting - sorry it took so long!