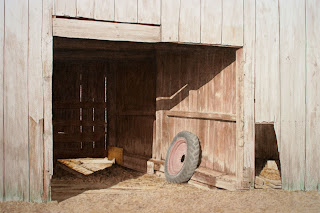 This painting is the second in the Abandoned Barn series and in keeping with the first, is another watercolor. Like Abandoned Barn - Winter, this painting is exactly as I saw the scene on a cool but sunny winters day. I was first attracted by the abstract shapes formed by light and shadow but there is a lot more visual interest besides that within the painting. The well-weathered boards of the outside are slightly cooler than those inside and I was careful to use only three basic tones throughout the painting; a lighter value for the exterior, a mid-tone for the sunlit interior and a darker but still warm tone for the shadows. This makes the rather busy painting less fussy and is more in keeping with the "KISS" theory. The shadows were amazing and really were the driving force behind the painting so I took extra care to make sure that they were accurate in shape as well as in tone. And I like the way that there are still details within the shadow areas although these I have kept subdued. The broken out boards on the right adds another dimension and tells a slightly different story. This attached room was originally a store room for corn and the slowly rotting floor was littered with corn husks. I couldn't help wondering what had broken out the boards like that but enjoyed the pyramidal effect of the sunlight shining inside.
Within the shadowed area deeper in the barn is a sunlit area from an open door which is out of the picture (see Abandoned Barn - Winter). Again the sun has created a wonderful abstract shape here and adds greatly to the composition. The small square board although in shadow is picking up quite a lot of reflected light and has a subtle golden glow to it. Through the gaps between the boards on the far wall you can see some bare branches and this speaks a little about the landscape beyond the barn. Other details within the interior are the beams and supports which are weathered in their own way, and were fun to paint. The old tractor wheel was the most difficult though and I had some struggles there, mostly with the treads on the tire. Eventually the painting was finished but it demanded a lot of effort along the way with many many washes of color. I slowly built up the tones until I was happy that the correct balance had been achieved. The ground was kept relatively simple with just a little detail to add interest. The painting's size is 15" X 22".

Posted by Jeremy Pearse at 7:09 AM

Jeremy,
This is a beautiful work, I love the composition and the light and shadow.

Thanks Terry, much appreciated! It's one of my favorite watercolors of late and I hope to get to do more in my Abandoned Barn series.