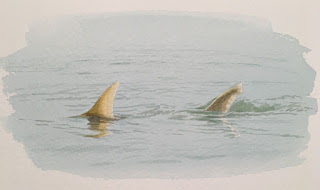 While walking along a beach last year, I came across two fishermen with their lines strung into the water. I got talking to them, asking about bait and what they had been catching. Just as I was about to move on, one got a huge bite and so started reeling in his catch! After a bit of a struggle, a fin appeared in the shallows and eventually a young Hammerhead shark was pulled out of the water! A series of photographs were taken by his family then the shark released back into the sea. Quite an experience especially since there were quite a few bathers around at the time! This quick watercolor study done in my sketchbook - about 4 x 8 inches.