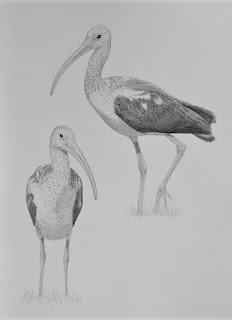 I found a flock of White Ibis on a visit to Chincoteague where they were mixing with other water birds near one of the paths. Initially nervous, they settled down after I stood quietly nearby then after a while, started to feed and preen as before. I managed a few sketches then later in my studio did these more detailed drawings. Early in the year, the adults mixed freely with the juvs but later during winter, the adults had split into their own separate group as had the juvs. Here some of the young birds are starting to show white feathers coming through as they slowly moult into the pure white plumage of adults.

Posted by Jeremy Pearse at 6:05 AM

Ibises are a great family of birds... great to see them depicted like this !

I have a few more ideas to consider with these and would like to do a larger watercolor if possible - perhaps with a group of them. They are wonderful birds!