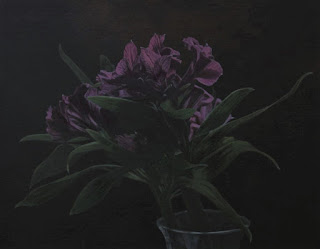 These Lily of the Incas flowers were a birthday gift to my wife from her friends. One evening while at work on something or another, I happened to look up and I noticed how most of the flowers and leaves were cast into shadow while the uppermost ones were lit up. I think I decided right there and then to try and do a painting of them. Since I wanted a dark background onto which I would paint the flowers, I first painted the whole canvas almost pure black (mixed from Ultramarine blue and Burnt Umber). I let more of the burnt umber show near the top indicating where there would be a bit more light. When that had dried for a few days, I started from the top slowly working my way down until I reached the glass vase which was only lightly indicated in greys going slight lighter on the rim where there were a few highlights. After working on and off for a few more days, the painting was complete. My initial concern was that the purplish shades that I would be using for the petals would be absorbed into the black background but the pigments were sufficiently strong enough to counter that. This was a fun one to do and I have more similar ideas to work on in the future. Size is 11" x 14" - oil on canvas panel.

Posted by Jeremy Pearse at 7:41 PM

Actually the painting looks slightly different in real life - the flowers are a little brighter while the leaves fade a little more into the background. It has proven to be a difficult piece to photograph properly. Since at the moment I don't have the right set up for taking better photos of my artwork (everything is still in storage), I have to make do with what I have. Later if I get better pics, I'll upload a new one.