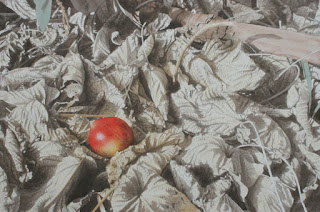 After a few sessions, I managed to complete most of the shadow areas. I'll still have to go back and darken a few parts and also add a little more of the finer details. Since most of the painting will be shades of ochre and brown, I add in a complimentary green to a few places - namely the two leaves at the top and a few blades of grass on the right. Keeping these colors to the periphery helps against too much visual distraction - I don't want too many things competing with each other. These greens are also somewhat subdued. The fallen branch with the shadow on the top right makes an appearance but I'll still have to darken it a bit. Next I'll glaze warmer tones all over the painting - what you see here is basically the underpainting so expect to see a dramatic change from this to the next!
Posted by Jeremy Pearse at 6:09 AM