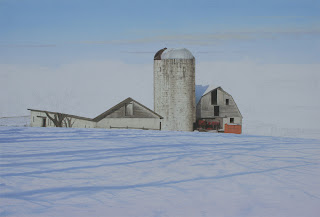 I saw this farm in morning snow not far from my home and due to a convenient side road, was able to park on the side and do a number of sketches and studies. Later back at the studio, I chose a large canvas and drew out the composition in pencil. Usually I start at the top of the painting then work down and forward but after putting in the sky, I became so interested in the silos and other farm buildings that I just had to paint them next. After working on the mid-ground area for awhile, I decided to finish the foreground so I added the snow with the long shadows cast from the tall trees just out of the picture on the left. Next I'll work on the background and finish up with some of the final details around the farm.
Posted by Jeremy Pearse at 6:25 AM

It must be difficult to get the shadows to look realistic, but they certainly do here.

Looking forward to the finished work.

I also look forward to the finished work although it looks great as is.

You really manage to make the sky and ground collaborate for harmony. Wonderful compositions!