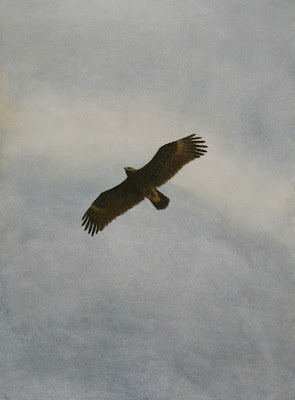 In an earlier post I mentioned that I was working on a series of birds in flight and my sketchbooks are slowly filling up with studies and sketches of birds as I work towards this goal. All this of course is leading me somewhere and that is to... Eagles! A most magnificent family of birds and until one has seen an eagle in flight, it is difficult to really comprehend the incredible presence they have. I have been fortunate to see many different species all over the world and hope to show some of the studies and paintings of them here. The first in this series is shown above.
The Greater Spotted Eagle winters as far south as South China and I saw this adult in Hong Kong. Usually one doesn't associate these large raptors with all the food, shopping and skyscrapers that has made Hong Kong such a popular destination but in the north near the Chinese border is Mai Po - an internationally recognised and critically important nature reserve. With the congregation of so many waders, ducks and other waterbirds, it is not unusual to see raptors of all kinds hunting there. Spotted eagles are a regular winter visitor to the region and the adults are relatively unmarked looking simply dark from underneath especially in strong sunlight. Which begs the question - why then are they called spotted eagles? Well the name quite accurately describes the juveniles which have bold whitish markings mostly on their wings and back.
I did this study first in a way of easing into painting larger birds in flight and unfortunately choose an impossibly smooth piece of illustration board to work on. This didn't take repeated washes well - I could have airbrushed the sky I suppose but since I never do this I decided to stick with what I had started with. The bird was painted in once the sky had dried being careful to keep the lighter areas to the primaries and under-tail coverts. Spotted eagles can look a little rough - that is to say that their flight feathers are seldom regular and I have heard them described as a 'ragged mat in the sky' which quite adequately sums them up! For my painting though, I cleaned this one up a bit and finished it off by layering on many thin washes of mostly sepia and burnt umber until I had reached the darkened tones I wanted. This watercolor is 9" X 7".
Posted by Jeremy Pearse at 7:05 PM