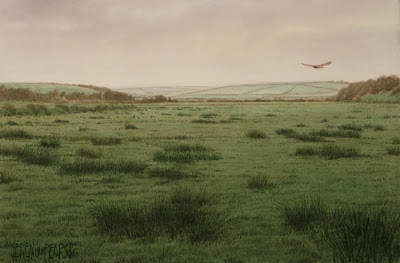 This painting is the second in the series of flying birds in a landscape. The scene here is on the outskirts of Bude in Cornwall where I was brought up. Looking up the valley between the river and the canal, we can see the sun breaking through a misty sky and gently lighting up the distant hills leading up to the moors. I had spent a lot of time here as a boy looking for birds and rowing the canal in a rented boat. Buzzards were often seen and I also found a nest. Checking back through the breeding season, I watched as the eggs were laid and brooded, (later one disappeared - perhaps taken by an egg collector) then the chick hatched, fledged then finally left the nest. All in all quite a wonderful experience!
After doing an earlier painting of the same valley, I did this one slightly differently and kept the bird small as this is so often the way that you see birds (especially birds of prey as they have been so heavily persecuted in the past and so are wary). The field was built up with many washes of color alternating mostly between yellow and green. I also wanted some similarities between this painting and the earlier Rough-legged Buzzard in Minnesota that was in my last post - both show the landscape in early winter but in the south of England as shown here, the weather is so much milder and grass is still green at this time. Both painting show similar birds at home in the landscape they occupy and it is interesting how when travelling all over the world like I do, that I find so often these self same similarities. The watercolor is 7.5" X 11". SOLD.
Posted by Jeremy Pearse at 7:20 AM