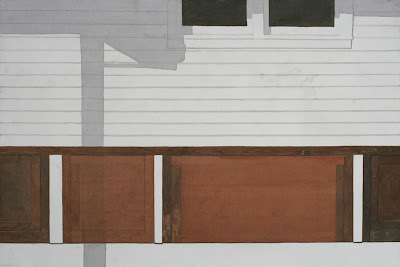 Quite a few washes were added to darken and define the wooden frames along with some of the wood grain patterning. Since I was getting closer to how I wanted those areas to look, I could now stand back and get a better idea of the overall tone of the work. Right away I noticed that the shadow areas still seemed a little too light so another darker wash was added which made me think that I had then gone too far! Not to worry though as at the same time I felt that the siding was still a little too bright so I would put a thin wash over all that which would (hopefully) bring the values back in line to how I wanted them. The two windows at the top were darkened but I still felt that they would need to go just a little darker - I'd do that next.

Posted by Jeremy Pearse at 7:43 AM