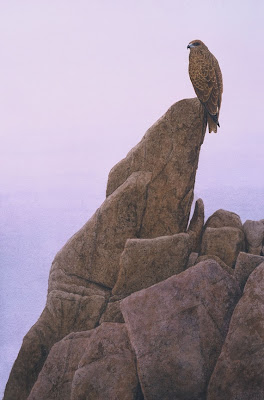 I have just returned back to the studio having been away for a week (I'll blog about this trip later on when I have more studies and paintings finished). In the meantime, I wanted to share this painting that I did some time ago of one of my favorite birds.
The Black Kite (Milvus migrans) is commonly seen in and around Hong Kong and was the first raptor that I drew and painted when I moved there. They nested on the island that I lived on so were always seen hovering and soaring around the breezy hillsides behind my flat. Using a powerful telescope, I was able to get some decent studies of them in my sketchbooks and these were supplemented by more detailed drawings and watercolors that I did at a raptor rehab center. After carefully considering the composition (mostly the way that I wanted to pose the bird and the shape of the rocks) I did the painting above on Arches watercolor paper after a smaller study was completed in my sketchbook. Size is 22" X 15".
Posted by Jeremy Pearse at 3:02 PM

Rocks are so complex to paint, when you really look at them. You did it beautifully. I love the shapes and volume as well as the texture.

Thank you Kathy, I do love painting rocks (and skies) and I suspect my next few postings will feature a lot more of them!