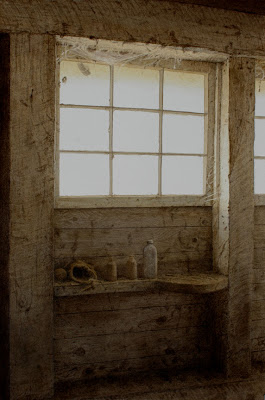 Finally here is the finished painting! It certainly took much longer that I had thought and is somewhat different from the image I had in mind when I first began thinking about doing another window in the barn series. This is often the case with quite a lot of my work when a painting tends to take on a life of it's own. Since I'm not copying directly from one source, changes do occur and are actually welcomed! Along with the much darker tones seen here, you'll probably also notice a significant color shift to that of the previous image in the demonstration. After careful review, I decided that the cooler grey at the bottom of the painting wasn't really working the way that I had hoped. So this was overlaid with washes of Sepia warming up those areas slightly as well as darkening them. I found (once again) that the finished painting was difficult to photograph accurately even though I tried a few different lighting situations. The contrast between the lights and darks is somewhat exaggerated here as in reality the bottles aren't so well defined and sit further into the painting. Uploading on Blogger always seems to darken the image too so it's actually a bit lighter than shown here. I wanted a slightly off-balance composition for this one so included part of the window to the right. I wanted you to feel that there is a lot more going on outside the picture plane that can't be seen. I worked hard to get an aged feel to the painting as along with the quality of the light, this was one of the primary motivations for doing this one. Size is 22" X 15".
Posted by Jeremy Pearse at 7:22 AM

I love this painting as it captures the essence and atmosphere, almost as if I am standing right there! I can picture my hand reaching out and touching the cobwebs!

Thank you very much! If you feel that then I have done what I set out to do, that is, to bring the viewer into the picture and experience what I did when I initially saw the scene.