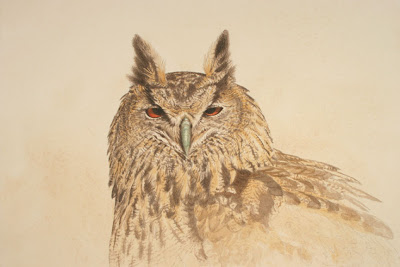 Most of the head has been completed here and I've started working on the wing and back of the bird. I have decided to keep those areas a little lighter than the head as I want more of the focus to be around the eyes. The orange-red helps here as it is quite a contrast to all the ochres and browns. You will probably have noticed that the eye on the right is closed slightly more than the one on the left. This is because the sun was coming from the right hand side so was a little brighter on that side of the face. I hadn't realised that owls could do this until I had observed the bird for some time and suddenly noticed it. A few more glazes to the eyes brought them to about the right tone and color. At times while working on portraits like this, I overlay the dark markings with a thinner wash of lighter color (in this case raw sienna) as this helps the darker colors 'sit' a little better on the paper. Here it also helped bring some slightly warmer tones to the bird as I had also decided to make this one a little darker (most owls have quite a range of coloring even among the same species).

Posted by Jeremy Pearse at 5:10 PM