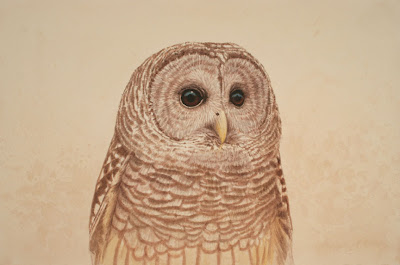 This study was actually completed before the Saker Falcon of my earlier post but as I wasn't quite happy with what I had accomplished, I put the painting aside for awhile and have been going back to it a few times working on a few different areas. And I still feel that there is some more to do to it. I'll put it in a frame temporarily and that should let me have a better idea on where to go with it next. I have a feeling though that just a little darkening of some of the brown marking should do it. Anyway, I do love these 'wood' owls, mostly it is their liquid eyes that have such depth to them that I find so fascinating. Similar to European Tawny and Ural owls, the Barred along with the Spotted owl are their American counterparts. I have seen (and painted) many Tawny owls over the years but have yet to see Ural or Spotted owls. Both of which would make interesting painting I'm sure. This watercolor study is 7 1/2" X 11".

Posted by Jeremy Pearse at 9:05 AM