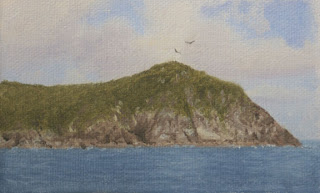 This small study was recently completed after an afternoon spent dreaming of days gone by. The headland shown in my painting jutted out into the West Lamma channel and was a place I visited often. Living on the island, Blakney Point was a longish but pleasurable walk from my home - thankfully there were no real roads and hence no cars. The path to the point (which I named after the real Blakney Point in England) took me meandered all over hillsides, past vegetable plots and a few smaller villages then on and out to the point. Located on the east side of Lamma Island in Hong Kong, it was a quiet spot and had excellent views of the main shipping lane into Hong Kong harbour. I would spend hours there occasionally drawing and painting but mostly just watching life go by. Black Kites (a common scavenger in Hong Kong) were often seen riding the updrafts around the island and were our most commonly seen raptor there. I only ever found one kites nest on Lamma but this may have been more because of the presence of a resident pair of Bonelli's Eagles than anything else. The oil is 3" X 5".
Posted by Jeremy Pearse at 1:30 PM