WADER SKETCHING ALONG THE SHORE 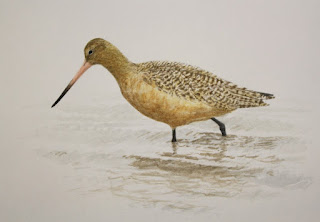 While visiting the Eastern Shore not too long ago, I came across quite a few groups of waders and managed some sketches of them. I am not all that familiar with Marbled Godwits but still did some reasonably decent studies of them, one of which is shown above. The smallish party of them were feeding quite close to the road so was able to work from the car. 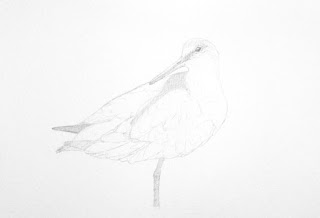 Willets were seen all along the beach and being a little more approachable, I did more studies of them. I tried to capture some different poses and some weak sunlight on the birds created an interesting interplay of light and shadows. 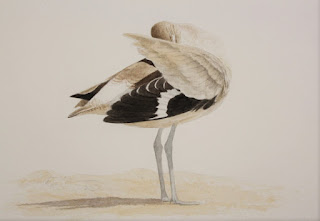 This bird was actively preening for some time which allowed me to first finish an initial drawing, then I could fill in the details with watercolor trying to capture the rather subtle plumage of these birds. It is only in flight that the black and white feathers are seen and are quite a contrast from the rather drab look of these birds. I think I need to do some oil studies of them which would allow me to more accurately paint the many variations of warm greys around the head, neck and back - as well as doing a better job of capturing the foaming surf they are so often seen in.

Posted by Jeremy Pearse at 6:38 PM