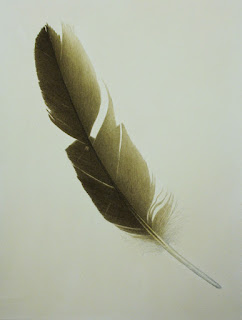 I found this feather in the middle of a field - the scene of an incident I saw in late March while staying on the Eastern Shore. It was quite damaged and I can clearly imagine just how this happened - plucked out during a squabble around a feeding site. It's obvious just where the eagles bill latched on about half way up the shaft and had cut through the barbs. The worn edges and tip show this to be an older secondary feather. My notes in my journal are as follows:

Way out in the middle of the bean field I see a small group of birds that through the telescope resolve themselves to be 2 Sub-adult Bald Eagles, 2 Turkey Vultures and a Black Vulture. The largest eagle is feeding on something that looks to be an animal leg, probably a deer, as I had recently seen one limping heavily. The other birds stand around looking on. Then the slightly smaller eagle (probably a male) walks around the larger eagle and launches an attack trying to snatch some food but is cleanly rebuffed! The female continues to feed while the Black Vulture then tries its luck – up to this point it has been quite active walking around and bullying the other two vultures which for now were just sitting patiently waiting. It moves closer to the feeding eagle crouching slightly but jumps back as the eagle lunges forward. The smaller eagle, senses its luck quickly (and rather nimbly) with one talon reaches out and grabs some of the carrion which looks to be another leg. Both eagles then feed for a while as the vultures look on, occasionally walking around and picking up a small scrap or two. Although being more active, the Black Vulture doesn’t find much either. Then the smaller eagle suddenly takes flight carrying the leg bone! It quickly gains height then disappears in a westerly direction and is gone. After the female has fed for a while longer, she too takes flight but I lose her against the backdrop of trees so don’t see which way she goes. The vultures are left with a few scraps which don’t keep them on the ground for long and they soon take wing then quickly fade into the dying light as evening comes in.

Posted by Jeremy Pearse at 8:16 AM