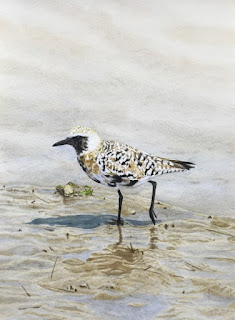 All through winter I had watched large flocks of waders nearby the house and my favorite amongst them were always the Black-bellied (Grey) Plovers. I loved hearing their soft evocative 'ploee' calls especially when it was misty outside. I would hurriedly dress and be out the door just as it was getting light so as to be near the tall hedge in time to watch them stream overhead from the channel and on to the large bean field beyond. Those times were especially moving as their calls seemed more muted and distant than usual as they wheeled about overhead - one minute visible, the next fading back into the mist. I waited all winter long for them to begin changing into their breeding plumage and finally I began to see dark spots appearing on the breasts of some of the birds. Their backs got darker too and eventually there was a whole range of plumages from ones still in their grey winter dress to birds that were complete in their breeding finery. While they always kept at some distance, I was able to do a few drawings through my telescope (some of which are shown below) trying to capture the different plumages I saw.

I was much luckier at Chincoteague NWR in early spring as the birds seemed more used to seeing people about so was able to get far better reference. I could stand or sit nearby as they rested near the water and complete as many studies as I needed so long as I didn't try get too close. All this led to the completion of the watercolor shown here. Of course, I had to chose a bird in intermediate plumage as this was what had initially excited me while waiting for them to change. Size is 12" x 9", watercolor on Canson paper. 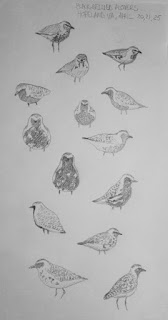 Posted by Jeremy Pearse at 6:34 PM

John, they often flew over the house too heading towards the marsh behind. I would usually watch them from the top deck and a peregrine or an eagle would put up the whole flock - at times they would be incredibly close.