EAGLE IN THE MIST 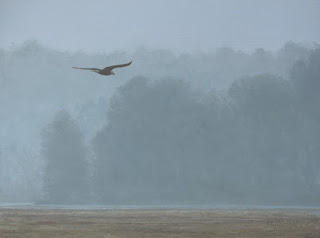 Over the past winter, we were able to observe Bald Eagles daily from where we were staying on the Eastern Shore. Apart from the resident pair, there were quite a few other eagles around too mostly feeding along the coastline but I sometimes saw them in the large bean field nearby. Occasionally mist would blow in from the sea and I would often try to capture the effects this had on the landscape. In this painting, an adult eagles is flying towards the distant tree-line which is diffuse and somewhat flat. I used mostly tones of grey for this with only slightly warmer shades in the foreground. Size is 9" x 12", oil on canvas.

Posted by Jeremy Pearse at 7:48 PM