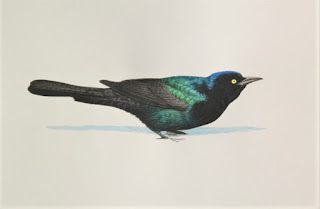 I found this Boat-tailed Grackle drinking from a puddle near the ocean at Chincoteague on the Eastern Shore and did some sketches as the bird was present for some time. Later at home, I painted this illustration, trying more than anything to capture the wonderful iridescent plumage of the bird as it appears in direct sunlight. Although not as obvious, the black on the wings and tail also have a subtle reflective sheen that changes due to the direction of the sun but these areas lack the bright iridescence seen on it's body. While following it around, I discovered that they are somewhat large and lanky birds with what seems to be an almost too-small of a head set on top of it's body. This watercolor was done in my sketchbook, size is 9" x 12".

Posted by Jeremy Pearse at 4:20 PM

You’ve captured the “sheen” well, Jeremy - I suspect this is difficult with shiny plumages...

Thanks, yes it (is) was difficult as I didn't want the bird to look too garish so had to find a balance between showing off the lovely iridescence without going over the top.