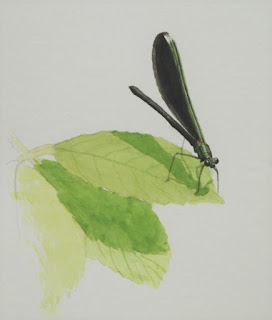 I saw this female Ebony Jewelwing near the upper lake in the nearby reserve. As damselflies go, they are quite large and striking! Especially the female which has small white marks on the fore-tips of each wing. A male was spotted nearby. He is dressed all in black without the white spots but makes up for it by having an incredibly vivid body, head and thorax. Mostly the shiny color is a metallic green but also seems blueish at times - looks magnificent in direct sunlight (I'll paint him next). Ebony Jewelwings have also seen in our garden - perhaps they hatch from our pond along with the other species of damsel and dragonflies there. The female painted above had only 4 legs!
Posted by Jeremy Pearse at 5:39 PM